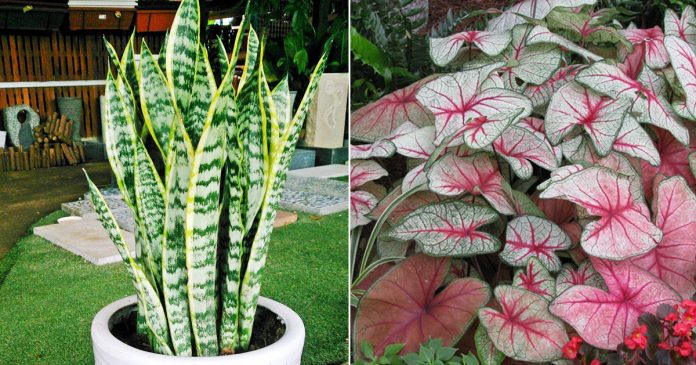 Nowadays, more and more people are interested in houseplants and keep many houseplants in their houses. Houseplants are famous for their air-cleaning abilities and good benefits besides providing a beautiful environment for our houses. However, little did we know that these useful plants can be toxic too.

Many people might be aware of the benefit of houseplants, but some of them might be dangerous and can be a hazard to children, an elderly person with dementia and even pets. The poisoning from these plants can occur from:

According to Dengarden, most garden centers don’t provide warning labels on their potted plants noting possible toxicity, so be sure NOT to keep these 10 plants where it can be reached by children or pets:

This plant contains calcium oxalate crystals which are toxic to both humans and animals, so keep it on high window sills or shelves.

Humans: Ingesting this has a mild side effect on human and children that includes a dermatitis reaction and the swelling of the mouth and digestive tract. In rare cases, there have been fatalities in children after ingesting large amounts of it.

Cats and Dogs: It has a much more serious effect on pets with reports of spasms, seizures, pain, and the swelling—and seems to be more toxic to cats.

Considered one of the best plants for removing impurities from the air, it is mildly harmful in small quantities but can also produce uncomfortable and serious side effects.

Humans: Might cause burning of the mouth, skin irritation, swelling of lips, tongue, and throat, vomiting, and diarrhea.

Cats and Dogs: Drooling, choking, swelling of mouth and tongue, difficulty breathing, and stomach upset. It can also lead to renal failure and death.

It’s easy to care with pretty leaves, but it may cause harm to both human and animals.

Not all lilies are toxic but some are more toxic to animals, with cats more susceptible to lily poisoning than dogs. Different lilies also produce different symptoms in pets and human. The more toxic lily varieties include:

Cats: All parts of the plant are thought to be toxic to them. Symptoms will include vomiting, lethargy, and lack of appetite. Renal and liver failure could occur and lead to death if not treated.

This lily is not a true lily plant as it is not a member of the Liliaceae family. It is excellent air purifiers but can cause painful symptoms and sometimes death if ingested by humans or animals.

Cats and dogs: There’s conflicting information on the toxicity of peace lilies, but mostly listed as toxic to dogs and cats—causing burning mouth, excessive salivation, diarrhea, dehydration, lack of appetite, and vomiting. Could also lead to renal failure if left untreated.

It is related to the philodendron and contains the same oxalate crystals. It is more likely to be ingested because it was usually kept in pots on the floor.

Human and pets: Extreme pain in the mouth, salivation, burning sensation, and swelling and numbing of the throat.

This plant is highly toxic that even ingesting honey made from its nectar can produce symptoms. Children should be kept away from this plant as death have been reported after ingesting a large amount of the leaves.

Popular houseplant for outside landscaping, this plant grows well in low light—but all of its parts are considered toxic to humans and animals.

Humans: Symptoms after ingestion can include painful burning and swelling of the mouth, tongue, lips, and throat, difficulty breathing, speaking, and swallowing, and possible blocked airways that can lead to death.

This plant is also known as mother-in-law’s tongue and good-luck plant—but clearly not a lucky plant for pets. The toxicity level in it is quite low but it does produce short-lasting symptoms.

Humans: Mouth pain, salivation, and some nausea. It can also produce a dermatological reaction in rare cases but mainly toxic only if ingested.

Cats and dogs: It can cause excessive salivation, pain, nausea, vomiting, and diarrhea.

It is able to remove airborne fecal-matter particles from the air, hence it is suitable for homes with pets. However, it can cause symptoms too when ingested.

Humans: It can cause severe skin irritation and ingestion can cause burning in the mouth and throat, stupor, convulsions, fever, and rash. Symptoms are only severe if large amounts of the plant are eaten.

Plants safety tips to reduce the exposure to plant toxins:

Be sure to follow these safety tips and avoid unwanted danger to your children and pets!

22-yo man suffered from stroke after spending 24 hours in front...