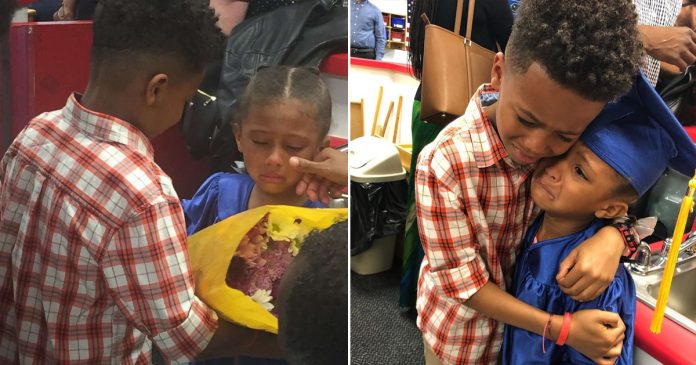 This is probably exactly what it means when people say that when you really love someone, you’ll be happy when they’re happy.

Charlee is a beautiful 5-year-old bright girl and she just graduated from preschool last June 21 in Fairfield County, Connecticut. As Charlee celebrated the special day with her mother Aundrea Smith and her father, one person watching in the audience is particularly proud of her—her brother, Derek.

Charlee walked off the stage when the ceremony concluded and that’s when she was approached by her 8-year-old brother, Derek.

He brings with him flowers, just for his little sister.

“He gave her a hug and said ‘I’m just so proud of you’. He cried and of course, she started to cry and we captured the moment,” told Smith of her son.

Smith’s sister didn’t want to miss out on the beautiful moment of joy and recorded a video of Derek and Charlee’s hug.

Smith stated that her children adore each other and the video is proof of how beautiful their relationship was. As the picture of the hug that Smith uploaded to her Instagram has now received more than 26,000 likes, she and her husband are just happy that the picture has brightened people’s day and bring them joy too.

Charlee on her graduation day with her lovely family.

“It’s really wonderful to see the impact it’s having on other people,” said Smith on the positive comments that people are leaving on her Instagram.

Charlee is nervous as she’s headed to kindergarten this fall, but she’s also excited to be attending the same school as her brother.

They are the sweetest siblings ever!