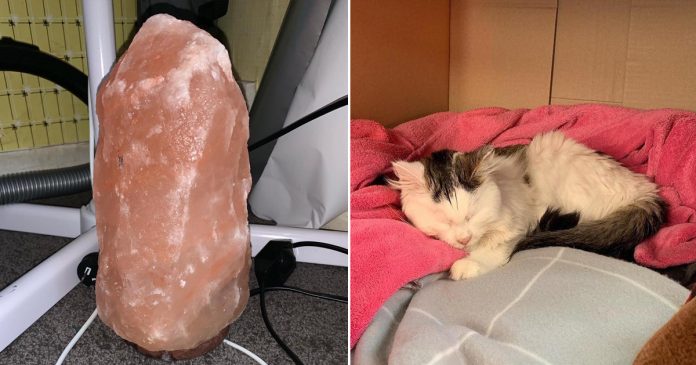 The himalayan salt lamp may serve as a beautiful house decoration but it is certainly not pet-friendly and toxic to pets according to a vet.

The vet which is based in New Zealand has issued a warning to pet owners to not let their pets to lick Himalayan salt lamp as it can cause sodium poisoning.

The warning came after a pet owner from New Zealand, Maddie Smith noticed that her cat acted strangely before the feline’s health quickly deteriorated within just hours.

*****WARNING ABOUT SALT LAMPS!!Written by Maddie Smith of NZ: Please please pleeease if any of you out there have salt…

Smith first noticed her cat, Ruby, was not behaving like her usual self but the cat owner later assumed that it was because of the cold weather.

However, Ruby’s condition worsened when she returned home from work that evening. At that time, Smith realized that Ruby could not walk, eat and drink as she struggled to see and hear.

When she took Ruby to a vet later, she was told that the cat had brain swelling due to sodium poisoning.

It turned out that Ruby had ingested by simply licking the Himalayan salt lamp which was previously placed in the lounge.

According to Smith, licking the salt lamp can be deadly to cats and dogs and that Ruby was lucky to survive the sodium poisoning.

“These salt lamps are addictive to animals and if they get a taste, it becomes just like potato chips to us! So please please keep this out of reach from your fur babies,” Smith wrote in her Facebook post.

Smith added in her post that she hoped for other pet owners to be aware of such consequences and never let their pets get near a salt lamp.

“Hopefully sharing this might help educate others on just how deadly these lamps can be if the salt is ingested. I know mines not staying in our house that’s for sure,” Smith concluded.