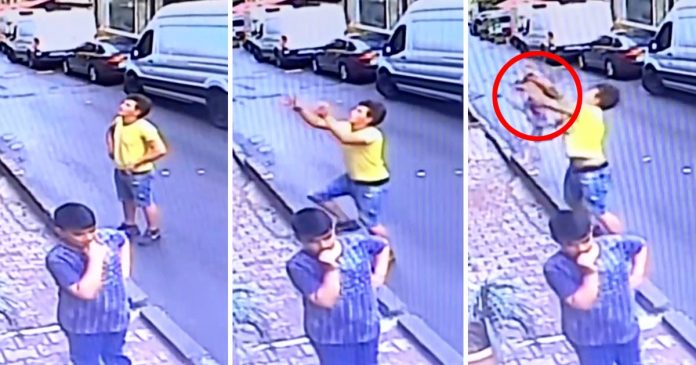 17-year-old Fawzi Zabaat is now hailed as a hero after his quick action saved a 2-year-old girl when she fell from a two-story apartment last week.

According to agency news Dogan, the incident took place when Zabaat was walking down the street in his neighborhood in Fatih district in Istanbul.

The teenager then saw the 2-year-old girl, Doha Muhammed was about to fall off the edge of her apartment while playing.

Realizing that the toddler was in great danger, Zabaat quickly positioned himself underneath to grab the toddler.

Just a brief moment after Zabaat stood by underneath the apartment, the toddler fell and he managed to grab the toddler just in time before her body hit the ground.

His heroic action was captured by a surveillance camera nearby. Thankfully, the girl did not suffer from any injuries.

According to local media, the girl was playing alone when she approached the open window of her family’s apartment. The mother of the toddler did not realize that her toddler fell off the apartment as she was cooking in the kitchen.

“I was just walking in the road when I saw the little girl at the window,” Zabaat told the AFP. “She fell, and thanks to God, I caught her before she hit the ground.”

Muhammed’s family has hailed Zabaat as a hero and rewarded him 200 Turkish Lira (US$ 35).

Watch the moment Zabaat saved the toddler when she accidentally fell from her apartment here.