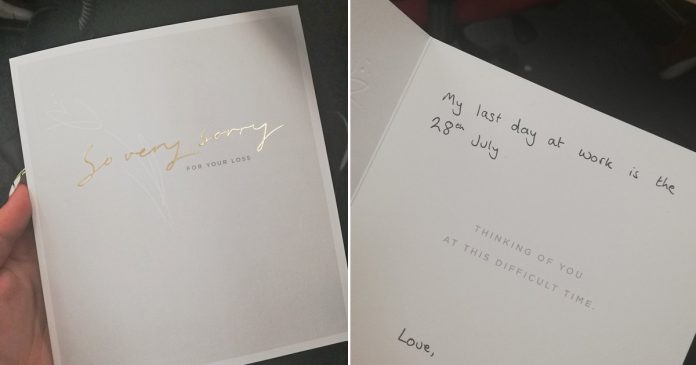 It can get quite awkward and unpleasant when you have to notify your colleagues and your boss about your resignation but one man showed how to avoid all the awkward moments in the most epic way ever.

In a viral Twitter post dated on June 27, one Twitter user shared a photo of a condolence card which read “So very sorry for your loss” written on it that her colleague gave her.

Imagine her surprise when she received the condolence card! However, the card continued to surprise her with was written inside.

“My last day at work is the 28th (of) July,” was written at the top of the card with text printed in the card that said, “Thinking of you at this difficult time.”

one of our team members handed in their notice like this ??? pic.twitter.com/tqc9Hn6ODE

Her colleague who gave her the condolence card was 22-year-old Sam Baines who had to quit his current job as he had to return to the university for the next academic year which will start this September.

“I’ve been working here for almost a year now and had to hand my notice in as I’m going back to university this September,” Baines said in an interview with INSIDER.

“We are a really close team and have a fantastic manager, so we’re always joking around and having fun. I knew I had to do something a little more creative when giving my notice to try and get one more joke in before I left!” he added.

“I knew my boss would find it funny, so I wasn’t worried about how they’d take it. I came up with the idea because I was always joking about how much they’d miss me when I was gone, then thought a condolences card would be the perfect way to finish it off,” he said.

According to the colleague who received the card, the card was very much taken in good spirits.

“Everyone was laughing and pretty amused with the card. It was done in good spirit and not as a petty reaction as some people think,” she said.

The condolence card was intended for their manager to read but it seems that hundreds of thousands of people around the world have read it as well!

I know someone who did exact same thing , exact same card ? pic.twitter.com/2W8xyFiXC4

Some users even shared condolence cards that they received or used when notifying their colleagues about quitting their job.

I’ve done this too lmao pic.twitter.com/vV5yZKAugf

It appears that a number of people have also come up with this creative and witty idea to inform their resignation!

finally a thread I can be apart of pic.twitter.com/oossj2h1ZX

Resigning from a job can be a sad situation for both the colleagues and the former employee but it looks like this card can help to make a positive from the situation and avoid the awkward and sad moment altogether!

An Unmarried 70-Year-Old Man has Adopted 506 Children from the Streets;...