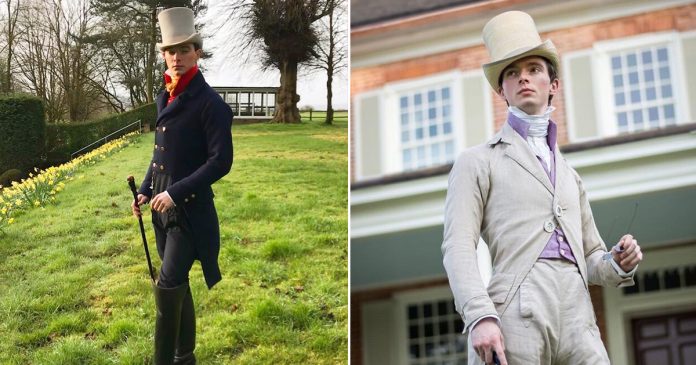 If he says that he time-traveled, I would completely believe him. This 25-year-old Zack Macleod Pinset only dresses in flamboyant Regency and historical clothing despite living in the 21st century.

Claimed that it’s the only way he feels comfortable, Ladbible reported that Pinset rejected the modern contemporary fashion and decided that he will only be wearing clothes that fit for a Georgian duke.

This is what he usually wears.

Some people might think he’s just cosplaying some historical figures, but he’s not.

With his distinctive sense of style from the 1820s, this young man from Hove, East Sussex is making many people turn heads with his extravagant attire. Thanks to this, Pinset got himself a huge following of more than 219,000 followers on his Instagram. and even received many marriage proposals too!

“It’s hard for men, we can’t show exuberance but I love what I do and I’m only doing it for my own enjoyment,” admitted Pinset.

“I’ve received many marriage proposals and many other things. I think it is indicative that women want a gentleman and someone that cares about his presentation and appearance.”

It all started when Pinset was 14 years old—he found a box of his great-grandfather’s old suits.

He realized that those suits fitted him so well, so he started to wear them—and that’s the last time he wore modern clothes.

“At 14, I made the symbolic decision to burn my only pair of jeans in a bonfire. It was a real turning point. On non-school uniform days, I would dress in three-piece suits, but when I got to the sixth form I started to dress in historical clothing every single day.”

“I was quite surprised that in the leavers’ book I was voted as the best dressed.”

“People weren’t necessarily saying that to my face but it was clear that there was an undercurrent of respect.”

Ever since that day, Pinset will wear a pair of knee-high riding leather riding boots, a floral waistcoat and riding jacket with long tails on his typical day. When he’s out for shopping in Brighton, Pinset topped his flashy attire with a top hat and a cane.

What’s even more amazing is that Pinset researched, designed and sewn all of his outfits.

Some outfits even taking up to a year to be perfected before he gets to put them on and wear them outside of the house.

“The response is almost always completely positive, and genuinely lovely. And it isn’t just a Brighton thing, I’ve been all over the world and people are inquisitive and appreciative.”

“Even when I was in London and a huge group of football fans was walking towards me, my natural reaction was to tighten up and look down. But even then they were good-natured.”