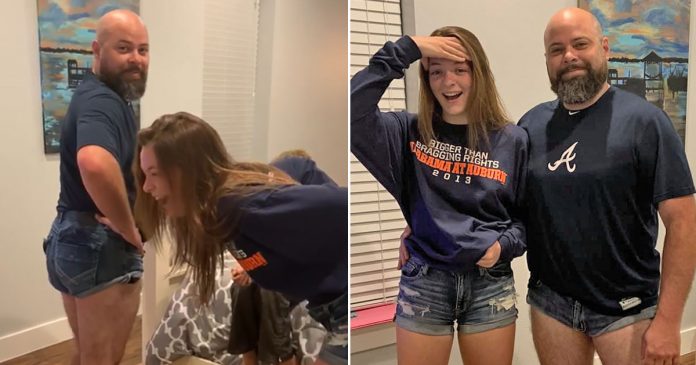 Being a parent is never easy especially when it comes to raising teenagers but one creative father from Florida makes it look easy with his hilarious dad joke.

Jason Hilley and his wife, Alison, have a teenage daughter, Kendall and a son, Walker.

He has always enjoyed being a father to his two children but as Kendall turns into a teenager, he realized just how important to make his children understand why he sets some rules in their household.

When Kendall wanted to wear revealing clothes and skimpy shorts, Jason felt that he had to take a creative approach when his advice fell on deaf ears.

“I came up with the idea to cut my shorts up after three weeks ago this past Monday, my daughter came out of her room and wanted to go ride the golf cart,” Jason told Bored Panda.

The father of two disapproved the idea of Kendall going out with her skimpy shorts and told her to wear something less revealing. When she complained that she only had shorts, Jason gave her credit card to buy a new pair of pants.

However, the father knew very well that his daughter used his card to buy another pair of shorts.

So, when Kendall told him that she was going out to ride the golf cart in her shorts again, Jason decided to teach her a lesson.

Together with Walker, Jason cut his jeans into short shorts like the ones Kendall was wearing and went to her room.

As soon as Kendall saw her father in a pair of skimpy shorts, she burst into laughter.

Needless to say, she understood what her father wanted to tell her.

“They both are smart loving kids. Kendall being a teenager, of course, will try and get away with stuff and push some limits, she is still learning,” Jason reflected on the funny video.

“But they understand we do things for a reason as parents. It is important that our kids talk to us and communicate with us and not be scared to do so,” he added.

The video has since garnered over 51 million views and netizens were amused by the father’s entertaining attempt to teach his teenage daughter a lesson.