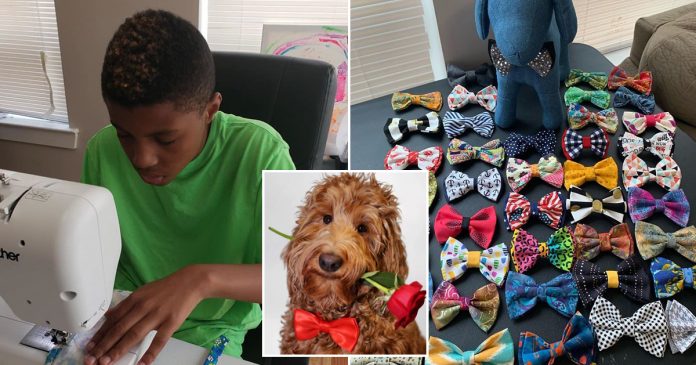 There are some shelter animals who only have to wait days to get a new home but the majority of them need to wait forever to be adopted.

The wait can be extremely long for them and there are some animals who have to spend the rest of their lives in animal shelters.

Hence, it broke this 12-year-old’s heart when he realized that many animals have to endure a long and painful wait while hoping for their new owner to come to adopt them every single day.

To help shelter animals to get adopted and go their new homes faster, Darius Brown came up with a lovely initiative — cute and colorful bow ties for cats and dogs at animals shelters.

The creative boy creates the bow ties for the felines and canines at animal shelters in hope for the bow ties to attract the attention of potential owners.

Darius himself has an incredible story of fighting against all odds. He was only two years old when he was diagnosed with speech, comprehension and motor skills delay.

When he was eight, he began to help his elder sister to cut fabric for bows.

His new hobby not only helped improve his fine motor skills but it inspired him to make use of his talent and skills to open a company.

At the age of 11, Darius founded “Beaux & Paws”, a pet couture company which specializes in creating fashionable bow ties for people and pets.

He then came up with an idea to donate his bow ties to the furry animals at animal shelters and adoption centers in the United States and the United Kingdom.

His initiative came after the devastating Hurricane Irma and Hurricane Harvey in 2017 left many animals without homes.

Following the natural disasters, many animals had to be sent to animal shelters and some even had to be put down due to lack of adopters.

Darius’s initiative has not only touched those around him but also many others across the country and certainly, hundreds of cats and dogs at animal shelters.

His story has made it to television shows and publications including former US president Barrack Obama who recognized his commitment to the community service.

He may be only 12 years old but Darius has proven that anyone can fight against all odds when there is a will!