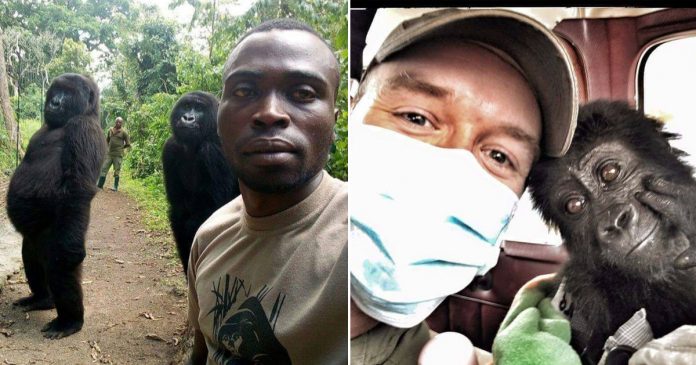 Most people work inside a stuffy building facing a computer almost every single day, but that’s clearly not the case for this man.

Unlike any other people, another day at the office for The Elite AntiPoaching Unites And Combat Trackers‘ worker looks very fun and interesting. Recently, a photo taken at the park in the Democratic Republic of Congo went viral as he was seen taking a selfie with two gorillas.

This is not your average selfie.

Since uploaded on 18 April 2019, the selfie of park rangers Mathieu Shamavu and female gorillas Ndakazi and Ndeze received 31,000 likes and has been shared for 23,000 shares.

Ndakazi and Ndeze are orphaned gorillas that have been living since their mother was killed in 2007.

What’s interesting about the picture is the fact that one of the gorillas casually stands on her side profile facing the camera—showing that she’s ready to roll and not one of the camera-shy animals. Another gorilla also doesn’t want to miss out being in the selfie by leaning slightly forward from behind Shamavu to make it into the frame.

Looking at the cute photo of gorillas on their two feet taking a selfie, many people can’t help to inquire about the authenticity of the photo.

“We’ve received dozens of messages about the photo. Yes, it’s real! Those gorilla girls are always acting cheeky so this was the perfect shot of their true personalities! Also, it’s no surprise to see these girls on their two feet either—most primates are comfortable walking upright (bipedalism) for short bursts of time,” explained Virunga National Park on their Instagram.

As a UNESCO World Heritage site, the park becomes home and the world’s only facility for orphaned mountain gorillas that are separated from their family due to poaching. Hence, over 600 rangers dedicated to anti-poaching efforts are required to go through an intense training process that takes approximately six months to complete before being able to work for the park.

It turns out Shamavu is not the only one enjoying the selfies with the animals, but the pilot who works for Virunga National Park, Anthony Caere got a few of his own too.

It’s not easy to be able to work at the park, but these selfies make it worth all the effort! So cute!