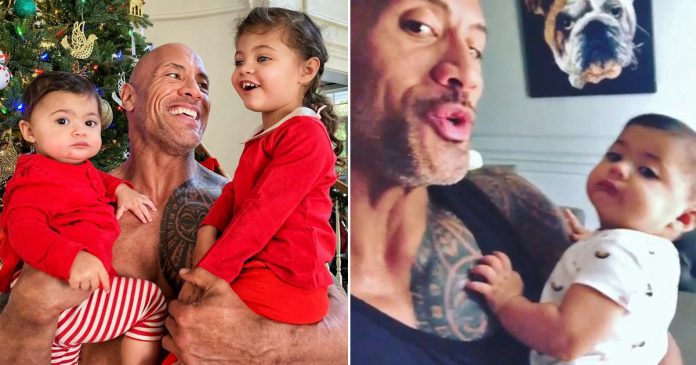 People used to joke that The Rock would name his child ‘Pebble’ when he got one, and now he really got one—but he didn’t name her Pebble!

From his looks alone, many thought that Dwayne ‘The Rock’ Johnson,  a former wrestler is a scary person. But little did we know that he’s actually a very sweet and caring father.

On April 2018, Johnson was blessed with the birth of Tiana Gia Johnson, his second daughter with Lauren Hashian. Since it was uploaded on Johnson’s Instagram, the cute picture of his daughter went viral.

I mean, look at how precious she is!

“Blessed and proud to bring another strong girl into this world. Tiana Gia Johnson came into this world like a force of nature and Mama, Lauren Hashian labored and delivered like a true rockstar,” wrote Johnson in his caption.

In between his work and daily things, Johnson never forgets to occasionally serve us with this occasional cuteness feed that we much needed.

Among the feed, Hashian uploaded a video of baby Tiana seemingly ‘talking’ to her dad and we can’t help to fall in love with her just as much as they did!

Whatever the idea is, we’re very sure that we agree with you too!

There’s also this video when Johnson was asking her something on the sexiest, coolest, and smartest daddy in the world—to which Tiana answered with giggling and laughing. Directly looking at her father very cutely, Tiana didn’t lose her cool and gave the exact reaction to each question.

We agree on whatever that is too, Tiana!

Besides Tiana Gia and Jasmine Lia—his daughters with Lauren Hashian, Johnson also has a 17-year-old daughter Simone Alexandra from his previous marriage with Dany Garcia. Despite being separated since 2007, they maintain a good relationship between them and remain friends.

“She jokes about everything with me. Everything. Nothing’s limited in our house and that’s the beauty of it,” told Johnson about his relationship with Hashian.

Hashian with Jasmine and Tiana.

Johnson celebrating his birthday with his strong princesses.

“To my third and youngest daughter, Tiana Gia—like I did when your two older sisters Simone Alexandra and Jasmine Lia were born, you have my word, I’ll love, protect, guide and make you laugh for the rest of my life. Your crazy dad has many responsibilities and wears many hats in this big ol’ world, but being your dad will always be the one I’m most proud to wear,” added Johnson in his caption.

Besides being an amazing father that he is, Johnson is also a loving and romantic partner to Hashian.

As we can clearly see in this picture.

The little Tiana turns into a big girl already!

Despite his a little scary look, Johnson is indeed a great partner and clearly an amazing father. Share this cuteness with family and friends if you agree!