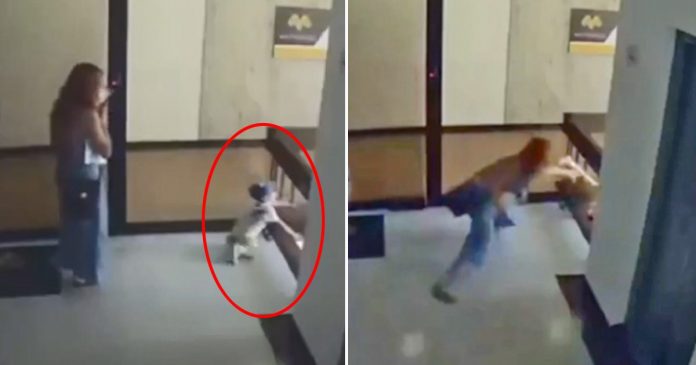 Thanks to a mother’s quick reflexes, she managed to save her child from falling when the child accidentally fell over the edge of a building.

We all know how mothers can be distracted sometimes when they have to handle multiple tasks at the same time just like this Malaysian mother who was occupied with a phone call when she was exiting an elevator with her young child.

The footage which has gone viral on social media begins with the mother who seems to be busy talking on the phone when she is exiting an elevator with her child.

She then stops right outside the elevator while her child wanders around towards the railing next to the elevator.

Even though she looks quite occupied with her phone call, her eyes suggest that she is still following her child’s movement as the boy walks towards the railing.

What looks like nothing unusual quickly turns into a suspenseful moment when the child suddenly trips over the ledge near the railing.

Thankfully, the mother notices that her child is about to fall head-first and immediately goes to his rescue and pulls him by the ankle just in time!

Meanwhile, a postman who witnesses the incident rushes downstairs just in case the boy slips through his mother’s fingers and accidentally falls on the ground.

Luckily, the mother manages to pull her child to safety and the boy does not suffer from any serious injuries.

Since the footage makes multiple rounds on the internet, netizens praised the mother’s quick reflexes for rescuing her child just in time before he fell.

Meanwhile, other netizens pointed out the safety flaws in the building’s railing following the incident.

It is simply terrifying to imagine if the mother was not quick enough to pull her child in time! While the mother may be lucky this time, the same cannot be predicted for other children who might wander near the railings in the future.

It is time for the building’s maintenance team to fix the railing and replace it with a safer design.