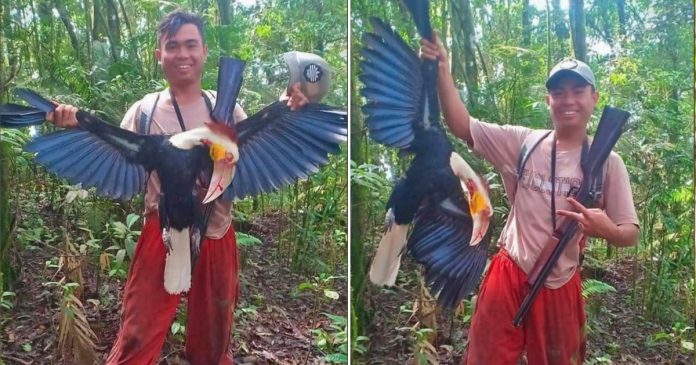 A man’s sadistic brag about killing an endangered bird has backfired him after the netizens were enraged of his selfish action.

According to Suar Indonesia, the man who was identified as Bobiean Sikro posted several photos on Facebook on Tuesday with the intention of bragging about killing a hornbill before his photos quickly caught the attention of netizens.

“Just enter this forest immediately and shot this (bird),” the caption wrote.

Sikro can be seen proudly holding both wings of the dead hornbill in multiple photos as he poses for the camera and grins cheerfully.

The hornbill which was killed by Sikro was a wreathed hornbill, one of the 14 protected hornbill species in Indonesia.

These birds are usually found in forests of north-eastern India and Bhutan and through mainland Southeast Asia as well as the Greater Sundas in Indonesia except Sulawesi.

Offenders who have been found guilty of killing the endangered bird can be fined up to US$ 17,609 as well as sentenced in jail for up to five years, as reported by IDNNews.

Indonesian Ministry of Environment and Forestry has also released a statement on Twitter that hornbills are a protected species in Indonesia and they will take stern action on offenders who are found guilty of killing the hornbills.

They also stated that the case is now under investigation and expressed their gratitude to concerned netizens who helped to alert them about the man’s action.