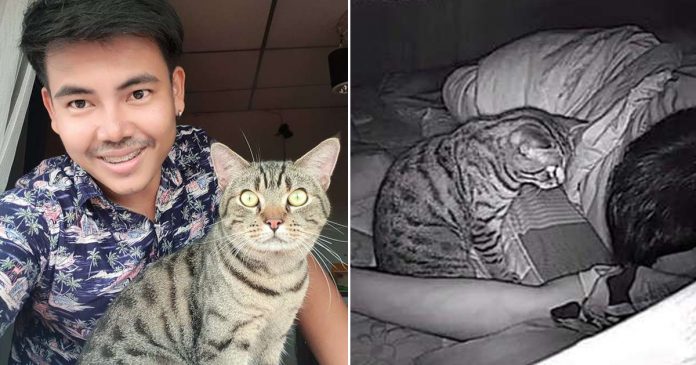 After struggling to breathe at night for quite a while, one man from Thailand set up a camera facing his bed at night to discover the reason for his breathing problem in his sleep but he never expected to find a hilarious discovery!

Lomphonten Lomphontan had been having trouble breathing during his sleep for a period of time earlier this year.

Thinking that he might have sleep apnea or asthma, the man then decided to find the reason for his breathing problem.

So, Lomphonten set up a camera facing his bed to record what exactly had been happening for the past few months when he was asleep.

One night, he went to sleep as usual after he set up his camera that night and checked his recording the following morning.

It appeared that his breathing problem was not caused by sleep apnea or asthma. It was his pet feline named Achi who was the real culprit!

Achi has always been a very affectionate cat who loves snuggling with his owner, Lomphonten and apparently, it even loves spending time together with Lomphonten when his owner was deep in his sleep.

According to The Dodo, Lomphonten revealed that his cat took the opportunity to snuggle by his side when he went to sleep.

In the footage Lomphonten shared on his Facebook account on April 20, Achi can be seen staring at him for quite a while before he proceeds to climb on top of Lomphonten’s chest.

Then, he lands his furry body directly on Lomphonten’s face and makes himself comfortable for the rest of the night.

Lomphonten took the footage over the course of several nights and it was confirmed that Achi was the one who had been ‘choking’ him out during his sleep.

“I sat and watched [the footage] one night,” Lomphonten told The Dodo. “It was very funny.”

Even though his sleep at night now is a little bit uncomfortable but Lomphonten does not have any plans to stop Achi from continuing his evening ritual.

He knows that it is Achi’s way of showing his affection to him.

“I feel very much in love with him that he loves me like this,” Lomphonten said.