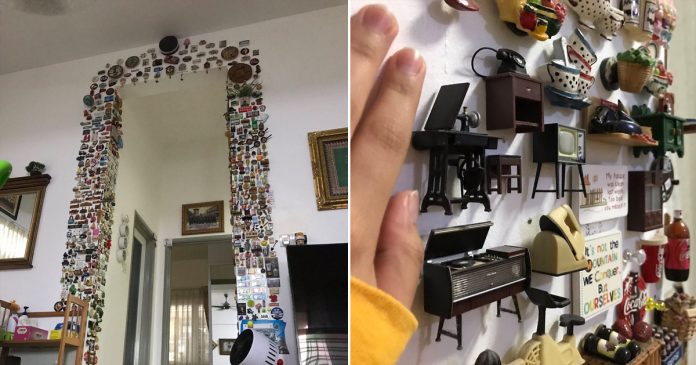 This is like how Shah Jahan built the iconic Taj Mahal as a symbol of love to his wife, Mumtaz Mahal, the late father of this girl did the same to her mother. Not that he built a building just for her, but he put up metal plates around their house just because his wife loves miniature magnets so much.

According to SAYS, this girl called Izzati Suza from Melaka, Malaysia went viral after sharing a heartwarming story about her mother and late father on social media. She shared that her late father has ordered for metal-plated walls to be done in their home as a gift to his wife for her huge collection of over 1,000 magnets.

“Reminds me of my dad. He gets sad every time a magnet falls off our fridge so he gave metal plates on the walls (as a gift) so my mom could stick her magnets,” tweeted Suza.

“The plate was put up during the renovation of the house, around 2014. Sadly he passed away in 2017. He also installed the plate in our previous house back in Ipoh, then we moved out to Melaka,” told Suza.

Not only collecting fridge magnets, but Suza’s mother also DIY-ed her favorite items into magnets to be included in her growing magnet collections.

Suza’s mother collections find their place everywhere in the house.

“When my mom finds cute items, she will DIY it by buying magnets and stick them on the wall using strong glue,” explained Suza about her 53-year-old mother who has been collecting magnets diligently since she’s 17 years old.

Her mother even DIY-ed anything that she likes and turned them into magnets.

“She likes all kinds of miniatures,” explained Suza on her mother’s favorite type of magnets throughout her 36 years of collecting them.

Thanks to her love for miniatures, Suza’s mother even opened up a shop to sell them in Melaka, Malaysia.