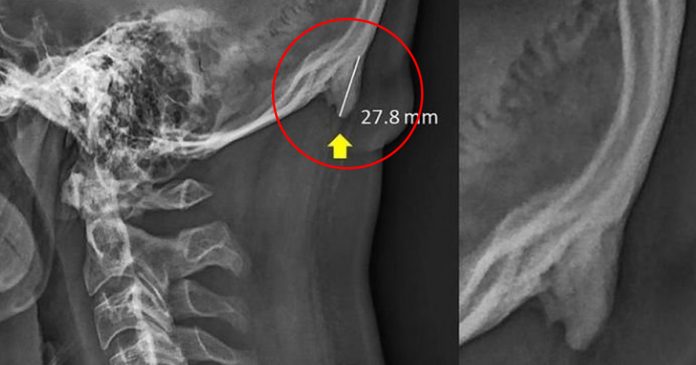 Humans are now developing a bone spike at the back of the head caused by frequently looking down at their smartphones, a recent study revealed.

The lump on the back of the head called an external occipital protuberance is believed as a result of the body’s reaction to using smartphones.

In a series of x-ray scans, David Shahar, a health scientist at the University of The Sunshine Coast, Australia noticed that more and more people are growing new bone layers on the back of their skulls.

According to Shahar in an interview with BBC, the phenomenon which was considered rare is now becoming relatively common in the last twenty years.

In his study, Shahar together with his co-author discovered the phenomenon from examining x-rays of the millennials at his clinic.

They examined 218 radiographs of the lateral cervical spine, where external occipital protuberance appeared in 18 to 30-year-olds.

41% of the x-rays revealed evidence of a growing spike at the back of the head with 10% of them showed the spike to be at least 20mm long. The longest spike recorded was 35.7mm in men while 25.5mm in women.

The phenomenon is more common in men compared to women with 67% as opposed to 20%.

The growing spike is a type of enthesophytes, which is abnormal growing bone located on a tendon or ligament. While enthesophytes are common with baby boomers, it is no longer common among millennials until the last decade.

Shahar said that the phenomenon could be associated with frequent use of smartphone among millennials, especially from early childhood.

Dubbed as “text neck”, Shahar explained that it occurs when the neck has to work extra hard to stabilize the head as the head is pointed down to look on devices.

He added that longer screen time will add more burden to the neck, forcing the body to create new support at the back of the head by growing bone.

Shahar said that the phenomenon will be more common in the future as the use of electronic devices is becoming more prevalent in modern society.

“Imagine if you have stalactites and stalagmites, if no one is bothering them, they will just keep growing,” he concluded.

Here are 8 types of food that are high in calcium,...