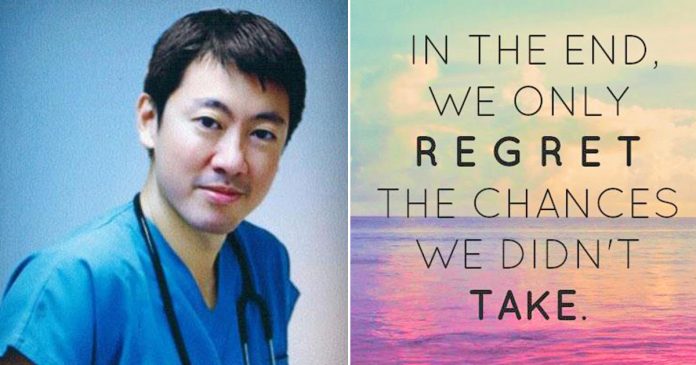 Many people associate happiness with success and wealth but for a cancer-stricken doctor who had everything when he was in his 30s, he begged to differ.

From a well-paying job as an aesthetics doctor that earned him millions of dollar to a fleet of luxury cars including a Ferrari 430,  Dr. Richard Teo Keng Siang had everything that he desired.

According to Asia One, Dr. Richard’s cosmetic surgery clinic was so successful that it “raking in millions” during the first year.

With all the success and wealth he accumulated, he thought that he was living the dream life until he was diagnosed with terminal lung cancer in March 2011.

Ever since he received the diagnose, Dr. Richard realized that it was not his wealth that made him happy. It was the laughter and sorrow that one shares with the people around them that makes a life worth living.

“(Every) Chinese New Year… I would drive my Ferrari (to) show off to my relatives and my friends. (I) do my rounds and you thought that was true joy? In truth, what you have done is just to elicit envy, jealousy and even hatred.”

“On my death bed, I found no joy whatsoever in whatever objects I had – my Ferrari, thinking of the land I was going to buy to build my bungalow, having a successful business.”

“See the irony is that all these things that I have, the success, the trophies, my cars, my house and all. I thought that (they) brought me happiness. But having all these thoughts of possessions, they brought me no joy. I can’t hug my Ferrari to sleep… No, it is not going to happen.”

The cancer diagnose may have been very devastating news to him and his family but apparently, it was a blessing a disguise.

Dr. Richard spent the last few months of his life discovering his inner peace and also reaching out to those who were in hardship.

His message was simple but powerful and meaningful; life is too short to neglect those around you.

“What really brought me joy in the last 10 months was interaction with people, my loved ones, friends, people who genuinely care about me, they laugh and cry with me, and they are able to identify the pain (and) the suffering I was going through.”

Dr. Richard also added that he could not empathize with his terminally ill patients despite seeing them dying every day because of cancer. It was only until he was diagnosed with cancer that he finally felt what his patients had gone through.

“If you ask me, would I have been a different doctor if I were to re-live my life now, I can tell you, yes I will. Because I truly understand how the patients felt now. And sometimes, you have to learn it the hard way.”

However, he concluded that it was never wrong to strive for success and wealth but the problem will come when we are too obsessed with the idea of it.

“The only trouble is that a lot of us like myself couldn’t handle it. I became so obsessed that nothing else really mattered to me.”