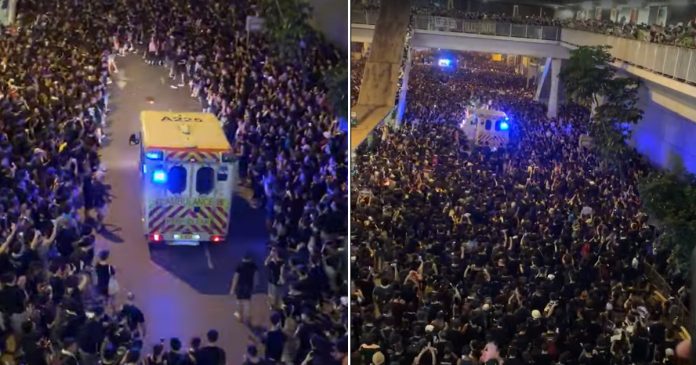 On June 16, 2019, thousands of Hong Kong protesters showed what being considerate and helpful to others was when they cooperatively made way for an ambulance to pass through.

In a recent series of protests, almost 2 million people took it to the streets in Hong Kong following a controversial extradition bill.

Hundreds of thousands rallied on the streets to show their protest over a pro-Beijing extradition bill.

Even though they were not on the same page with the government, that did not mean that other civilians have to suffer the consequences.

On the day when thousands of Hong Kong residents marched through the streets, an ambulance was traveling along Harcourt Road, outside the Central Government Complex in Admiralty.

Hong Kong protesters parting like the Red Sea for an ambulance to pass. No chaos.This is why Hong Kong is awesome: https://bit.ly/2RgxURm

According to a media report, some protesters had fainted during the protest and paramedic help was later called to the area.

The ambulance swiftly passes through the street where the protesters are rallying as they make sure to stay clear of the ambulance’s path.

There are other similar clips where protestors make way for buses to pass through as well.

According to reports, the protest which recorded the biggest turnout in Hong Kong since the 2014 protest reported that about 2 million people attended the protest.

Hong Kong has a population of 7.48 million which means that one in four Hong Kong residents took part in the massive protest.

It began after the Hong Kong government proposed a pro-Beijing extradition bill that would allow wanted criminal Hong Kong suspects to be extradited to China for trial.

While Hong Kong is technically under the rules of China after the 1997 handover of power from the United Kingdom to China, the city is supposedly allowed to be free to govern itself for 50 years until 2047.

However, recent pro-Beijing legislations have seen more of China’s influences being imposed on the city’s political and legal system over the years.

In response to the latest extradition bill, people in Hong Kong are demanding no less than the bill being completely withdrawn and for Hong Kong’s Chief Executive Carrie Lam to resign.