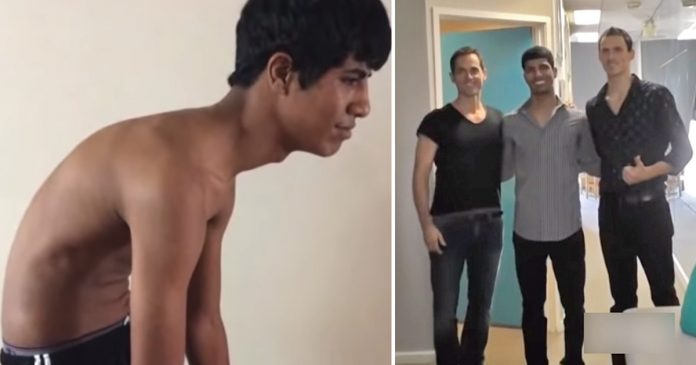 Chiropractic is a form of alternative medicine mostly concerned with diagnosis and treatment of mechanical disorders of musculoskeletal system, especially the spine. After every practitioner he saw turned him away because they were too scared to touch him, Muntathar Altaii decided to put his last hope on chiropractic.

On 19th April, the 17-year-old Muntathar or also known as Mun sent a message to Dr. Ian Rossborough on Facebook. Originally a nurse turned Chiropractor, Dr. Rossborough has been a health care professional for over 30 years.

Mun sent a message on his concern to Dr. Rossborough.

After pulling out a tree root, Mun had been in bed for 3 months in excruciating pain. With numb down his leg, relentless pain and extreme spinal kyphosis, Mun decided that Gonstead Chiropractic was his last hope and travel to Australia with his father, Asmir to meet Dr. Rossborough.

“Everyday he said ‘I don’t want to be alive, I want to die’ because there’s so much pain. He can’t walk, he can’t move. He will eat only once in two or three days,” explained Asmir about his son.

Before the treatment, x-ray needed to be taken in 3 parts on Mun.

Dr. Rossborough started with giving a few light touches on Mun’s body but the young man looks like he’s in terrible pain.

After observation on the x-ray, Dr. Rossborough said that Mun’s joint was not functioning properly.

But after only a few touches from Dr. Rossborough, Mun can feel a few spots on his numb feet and able to stand a bit taller than when he first came. After a few days, he can walk a bit better even though he’s still not standing properly.

Mun was in constant pain while having the treatment.

His stand improves after the treatment.

Previously, Mun would have to pick his leg up with his hands to walk but he can now lift his own leg without using hands.

On day 7, Dr. Rossborough continues to treat Mun’s spine. He uses assistance this time as it’s important to keep the spine safe and stable while doing the treatment. On day 10, Mun basically was able to stand up straight.

Looking at the amazing transformation to his son, Asmir can’t hide his feeling and began to tear up.

Mun even sent his family a picture to surprise them on his amazing progress.

With a little more treatment from Dr. Rossborough, Mun can now stand as tall as his doctors.

Mun’s amazing transformation after the treatment.

His skin condition is also getting better.

Mun returned home to an overwhelmed and ecstatic group of family and friends at the airport. His mother was in tears. Mun’s wish to graduate high school recently came true.

He graduated with honors and stand tall and proud alongside his friends.

After this life-changing experience, Mun has decided that he wants to become a Chiropractor just like Dr. Rossborough.

10 simple things you do everyday that might actually give you...

Babies fake cry to get attention and experts say it is...