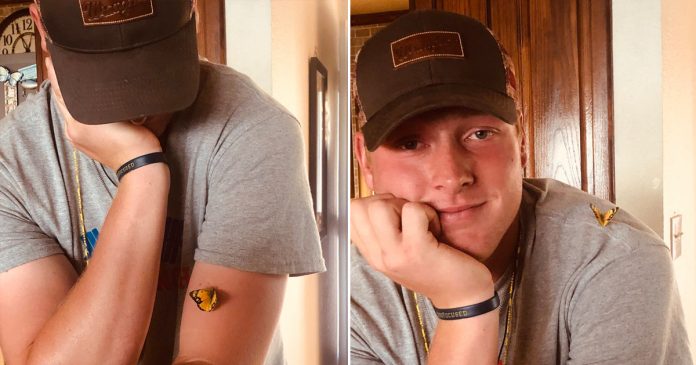 A left-handed college pitcher Cole Shinsky who lives in Fort Worth, Texas lost his mother nine years ago. But he believes that his late mother is still finding ways to comfort him from the afterlife after his recent encounter with a yellow butterfly.

Recently, The Dodo reported that Shinsky has been facing a number of struggles—from shoulder problems to potentially switching schools.

Thanks to that, he longed for his mother even more. During her life, Shinsky’s mother told her son one thing that Shinsky never forgets till this day.

“She mentioned that she’d be a yellow butterfly one day,” wrote Shinsky on Twitter.

This is incredible… Mother passed away 9 years ago and she mentioned she’d be a yellow butterfly one day. For 9 years I have been mezmorized every time I see one but I have never been close enough to touch one. Today… this happened! Happy Mother’s Day Mama ? pic.twitter.com/DpF6CaQb4B

Then around Mother’s Day, an unexpected visitor miraculously arrived when Shinsky needed his mother the most—a yellow butterfly.

“I was fishing off the dock at my aunt’s house and she started walking down to me with her hands cupped together. She said ‘Guess who came to visit?'” told Shinsky to The Dodo.

Shinsky didn’t understand what his aunt was talking about initially while having tears in her eyes. She then opened her hands and there’s a small yellow butterfly on her palm.

“The butterfly seemed perfectly content being held. My aunt gently handed her to me.”

“When I finally stopped moving, she worked her way up my arm and sat on my left shoulder for a few minutes before I walked outside again.”

“I think she specifically came to visit because I am currently in the middle of looking for a different school and I’ve been having a rough time at college. She was just letting me know that she is still here.”

The yellow butterfly stayed with him for a few minutes before she flew away.

To make the moment last forever, Shinsky has a plan to get a tattoo of two yellow butterflies looking over his left shoulder.

It was such a beautiful moment.