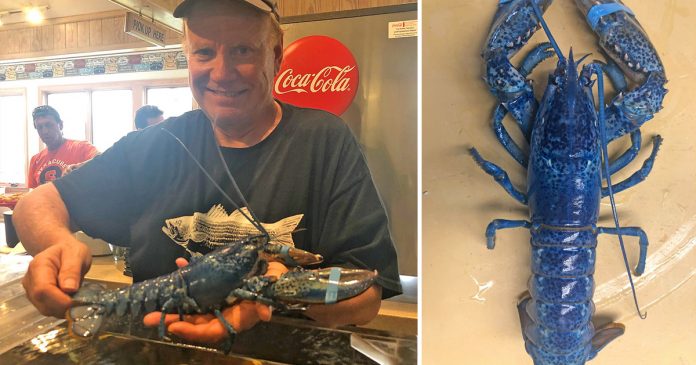 The staff at Arnold’s Lobster & Clam Bar at Cape Cod, Massachusetts recently had a one in two million chance when they received a rare blue lobster out of the blue.

“Well looky here—a BLUE lobster! (Only 1 in every 2 million is blue!) This was brought into us after being caught in the Atlantic. Stop in to see it in person!” the caption of the post says.

Well looky here—a BLUE lobster ?! (Only 1 in every 2 million is blue!) This was brought into us after being caught in the Atlantic. Stop in to see it in person!

It was caught in the Atlantic before it was delivered to the restaurant by the supplier.

While lobsters are widely fished around the world, the same cannot be applied to lobsters with unusual color like blue which is only seen in one in two million.

Meanwhile, yellow lobsters make even more rare appearance which is one in 30 million.

According to the University of Maine’s Lobster Institute, the blue color of the lobster was actually the result of a genetic defect.

“The [blue] coloration comes from a genetic defect that causes the lobster to produce an excessive amount of a particular protein that gives the lobster that unique coloration,” the institute explained.

The blue lobster may be hard to find but apparently, it is not the rarest type of lobsters in the world.

The institute added that the rarest type of lobster is the albino. There is only a 1-in-100-million chance to encounter an albino lobster.

The restaurant later stated on Facebook that they have decided to let the lobster alive as they are planning to release the rare species of crustacean and give it to an aquarium.