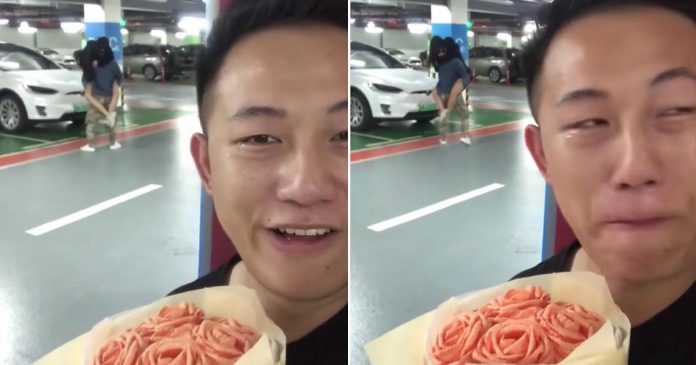 The last thing this man was probably hoping to avoid when he surprised his girlfriend with a romantic birthday surprise was that she did not like the gift.

Apparently, it never came across his mind that he was the one who would receive a surprise instead!

As a boyfriend, he wanted to give a surprise to his girlfriend on her birthday. So, he prepared a bouquet of roses for his special girl, hoping that it could put a smile on his girlfriend’s face as soon as she saw it.

Unfortunately, what he thought was a sweet surprise did not end as romantic as he had planned.

In the post, he shared several images of him in the parking lot while holding the bouquet of roses.

While the images looked nothing unusual, notice his expression and a couple behind him.

Turned out, the woman who was just a few meters away from him was his girlfriend!

It certainly did not warm his heart to see how unbothered his girlfriend was to display public affection to another man while he was on his way to surprise her for her birthday.

However, like any wise person who caught their partner cheated on them before their eyes, the man took several photos as evidence of her infidelity.

When the post went viral on social media, many users shared their sympathy for the man and asked him to break up with his girlfriend. However, some users were skeptical that the photos might have been staged for a publicity stunt.

Well, whatever it is, now the girlfriend will finally come to the realization of why she did not get her birthday surprise this year!