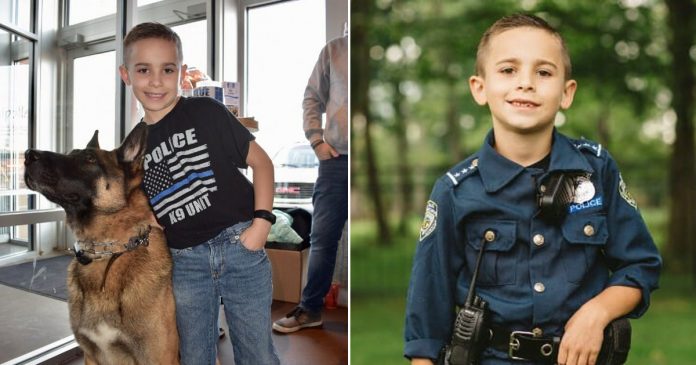 When Brady Snakovsky saw a K-9 officer who did not wear a vest on television, he immediately wanted to do something about it.

That was how Brady’s K-9 Fund was founded.

“He noticed a dog on television who wasn’t wearing a vest and he wanted to go out and buy a vest and give it to a K-9 who was in need on one,” Leah Tornabene, Brady’s mother told FOX 8.

It began when Brady saw a K-9 officer that did not have a ballistic vest and asked his mother about it.

The boy was frustrated when Leah told him that a K-9 officer did not always wear a vest like its human partner.

This information troubled the 9-year-old boy. As Leah explained that a ballistic vest could be quite expensive, Brady thought that they could set up a GoFundMe to raise funds.

Brady just wanted to raise funds so that he could buy a ballistic vest for the K-9 officer he saw on television but as words quickly spread afterward, he found out that his fundraising efforts could help him buy more than just one ballistic vest.

Each ballistic vest costs about US$1,200 and it does not only protect the dogs but it also allows a free range of motion and keeps them cool.

The K-9s whom Brady helped were not the only ones who were grateful for the free ballistic vests.

“Makes me feel great knowing that not only is he protecting me but I’m also protecting him and it’s a great partnership and a relationship,” said Trooper Jim Baker, whose K9 Rexey received one of Brady’s donated vests, said.

“Most police K-9 units are self-funded and the majority of K-9 units do not have ballistic vests.”

Brady who wishes to become a police officer one day like his stepfather hopes to provide as many ballistic vests for all “deserving” officers.

“Helping those K9s stay safe as they help us each day in the community is the least I can do,” he said on his GoFundMe.

“Hopefully one day all K9s are provided with a vest, until then I am here to help those in need of one!”