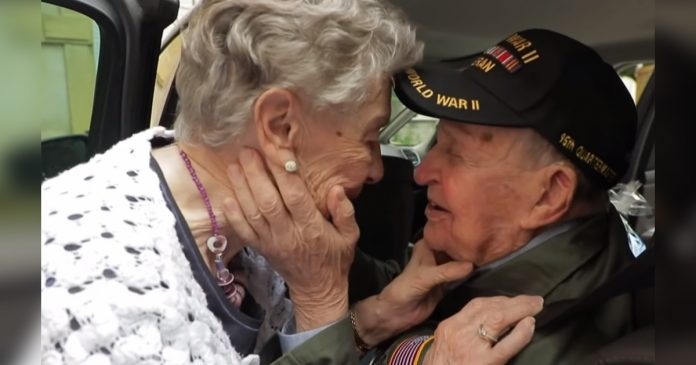 KT Robbins was 24 and Jeannine Pierson was 18 when they fell in love with each other in 1944 before they were separated from each other after just two months. Now, 75 years later, the lovers were finally reunited.

Back then in 1944, young KT Robbins was stationed at Briey, eastern France. That was when he met French girl Jeannine Pierson.

Robbins was looking for someone to do his laundry and Pierson’s mother agreed to help.

The two quickly fell in love with each other but unfortunately, Robbins had to leave Briey as he was ordered to go to the Eastern Fron.

However, they never give up the hope that one day, they could reunite as lovers once again.

After the war ended in 1945, Pierson learned basic English phrases in the hope that Robbins would come to find for her.

Instead, Robbins returned to America. Their love story ended when both of them found new love and got married. Robbins married Lillian, his wife of 70 years and the couple worked together at a hardware store in Mississippi for 50 years. Lillian passed away at the age of 92 in 2015.

Meanwhile, Pierson married her husband in 1949 and had five children.

Even though they lived separate lives, both Robbins and Pierson never forget each other.

Robbins, having kept a photo of Pierson thought that his first love had already passed away until a journalist helped him to find Pierson for their 75th anniversary of D-day.

“For sure I won’t ever get to see her,” Robbins said.

It turned out that Pierson is still alive and is currently staying at a retirement home in Montigny-lès-Metz, Moselle, just 43 kilometers away from where they first met.

Now at the age of 97, Kt Robbins finally reunited with his former lover Jeannine Pierson, 92, 75 years after they were separated in World War II.

It was such a heartwarming reunion for the two when they finally saw each other again after seven decades.

Now both widowed, Robbins and Pierson promised each other that they would see each other again.

“I always loved you. You never got out of my heart,” Robbins proclaimed his love for Jeannine.

1yo toddler shows off impressive swimming skills like a pro swimmer