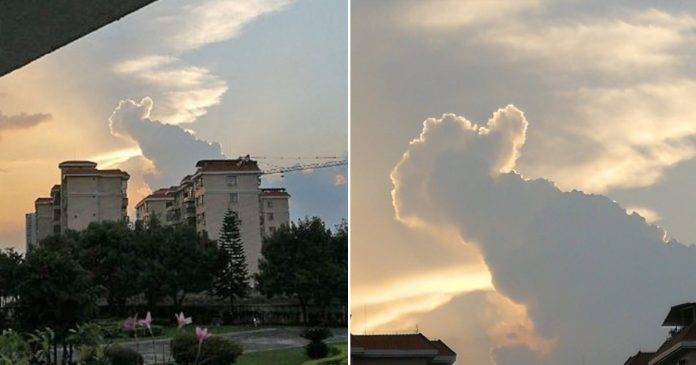 When you’re exhausted from work and tired of studying all day long, sometimes all you need is just a little bit of encouragement to keep you going—and Mother Nature knows exactly what to do.

A girl was studying at school in Shaoguan city, China as she was preparing for her upcoming university entrance examination when she saw something out of ordinary.

The girl was exhausted from studying and take a moment to look out of the window when she suddenly saw a cloud that looked like it’s giving her a thumbs up at 6:40 PM.

“I was feeling low and exhausted from studying, but I suddenly saw a cloud shaped like a giant thumb.”

“It looks like the cloud is telling me to cheer up and as if it was asking me to press the ‘like’ button,” told the girl to a Chinese video platform Pear.

“I wish all the students preparing for their examinations will get to enter their desired universities,” added the girl.

As the cloud strongly resembles the thumbs up icon used by various social media sites such as Facebook and the Twitter of China, Weibo, the pictures of the cloud have been gaining quick popularity and has been shared more than 17,000 times. The pictures also received more than 120,000 likes just a few days after it was shared on Weibo.

“Cheer up! Even the universe is encouraging you!” commented one user.

“I feel confident about my exam after looking at this picture,” added another user who is also going through the examination season.

I would definitely feel good too after looking at the sky that looks like this!