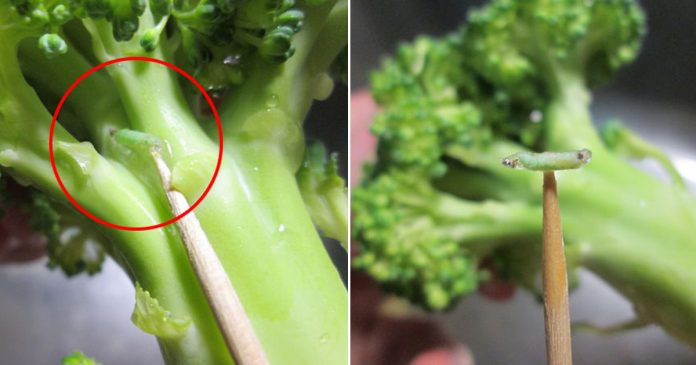 In an open-ended survey conducted by a vegetable brand Green Giant, nearly 4,000 Americans across the nation voted in a poll for the most popular vegetable in each state.

Just in time for National Eat Your Vegetable Day on June 17, the survey discovered that broccoli is the most popular vegetable in 47 percent of the United States followed by corn in the second place.

We can safely say that most Americans love broccoli.

In a study in 2007, researchers at the Linus Pauling Institute at Oregon State University found a compound called sulforaphane—strong anti-cancer properties in vegetables such as broccoli, bok choy, and brussels sprouts.

There’s nothing better than eating delicious vegetables that are anti-cancer and high in nutrients, but did you really know how to wash them?

Some of us might be aware that there are definitely pesticides and insects lurking in the cruciferous vegetable, but did you know there are worms in the stems too? These worms have the same color as the broccoli stem, so you might have been eating them all along!

A blogger recently shares and documents his steps on how to wash them properly:

1. Wash the broccoli with plenty of water to remove dust and pesticides.

Avoid cutting the broccoli first to avoid them from taking in more pesticides from the surface.

2. Soak the whole broccoli head in water for 5 to 10 minutes.

The worm might gradually come to the surface. Another reason not to cut it first is to avoid losing nutrients from soaking.

3. Cut the broccoli by stems.

Cut according to a preferable amount.

4. Use a peeler to trim the broccoli stem.

You will clearly see the worms if you do this.

5. Pick worms with a toothpick.

Not all worms can be removed from soaking the vegetable in water. So carefully pick them with a toothpick before rinsing them again with clean water.

It’s easy to miss out the worms because they have the same color as the stem.

There you go! We are done with the washing part!

The steps are quite simple but need a bit more effort and time to make sure you’re not getting any extra ‘protein’ from eating the vegetable!

To cook them, you can just simply blanch them in water for three minutes,

and it’s ready to be served!