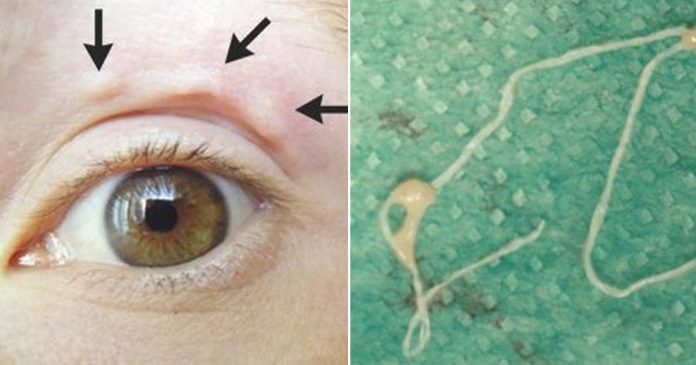 If you have a weird lump on your face or body, quickly get them checked as it might be something worse than you expected. As for this 32-year-old woman in Russia, the small and itchy lump on her face seems to move around a lot—and it’s terrifying!

When she first noticed the scary lump, it was just below her left eye, rather small in size. She initially thought that the small lump was caused by a mosquito bite but the itchy feeling just wouldn’t go away.

Five days later, the woman was surprised to find that the small lump under her eyes was gone but moves towards the upper part of her eye. The moving lump didn’t stop there as it later moved to her upper lip 10 days after it first appeared.

She said that it didn’t hurt but it was itchy at times.

Puzzled over what’s happening, the woman documented her selfies with that strange lumps on her face. Figured that she can’t solve the mystery on her own, the woman finally went to a doctor for help.

“She had first noted a nodule below her left eye. Five days later, it had moved to above her left eye, and 10 days after that to the upper lip.”

“She documented these changes by taking photographs of her face. The nodules occasionally caused a localized itching and burning sensation, but otherwise, she had no symptoms,” told Dr. Vladimir Kartashev of Rostov State Medical University in Russia in a letter to the New England Journal of Medicine.

They discovered that the moving lump around her face turned out to be a parasitic worm identified as Dirofilaria repens,  a type of nematode that often affects pets like dogs and cat.

According to the parasitologist Fernando Simon of the University of Salamanca in Spain, the worm is usually harmless and causes very little physical damage to the patient. Taking it out will solve the problem. So Dr. Vladimir Kartashev of Rostov State Medical University in Russia pulled out the worm.

The worm can grow up to 6 inches long and does migrate inside the body—could also cause danger when it reaches vital organs.

Thankfully, the woman made a full recovery after the parasite was removed.