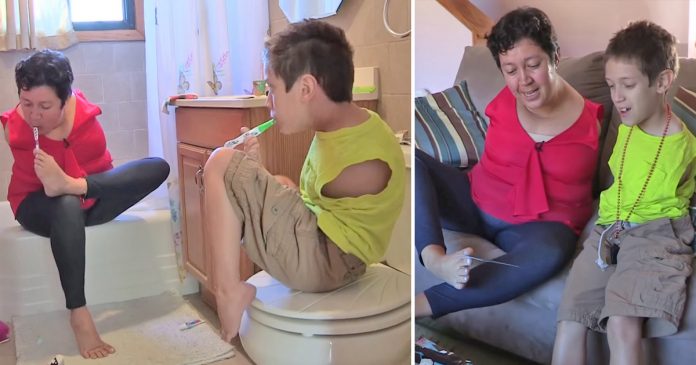 Life is hard even when you have a complete set of arms and feet. But for this mother, Linda Bannon and his son Timmy, both were born with Holt-Oram syndrome, a genetic disorder that causes abnormalities of the upper limbs and heart. Which means, they’re born with no arms.

Growing up, this amazing 35-year-old woman from Chicago was never treated differently by her parents. She did all the chores and participated in all activities. She doesn’t prefer using prosthetic arms because it’s uncomfortable—so she uses her feet to do what other normal people do with their hands.

Bannon was born without arms due to a rare genetic disease.

But for the most mundane chores that we do every day, it becomes a challenging task for Bannon. She basically learns to use her feet to do just about anything and everything by the age of 12.

She learned how to cook, brush her teeth, put on makeup, type on her computer and even sew using her feet.

Despite her disability, Bannon received a degree in elementary education and eventually married in 2004 to Richard, a guy who accepts her completely.

“We hit it off straight away. He wasn’t fazed by my disability. He liked my independence.”

Bannon got pregnant and was told by the doctor that there’s a 50% chance that their child will be born like her.

“In the beginning, obviously it’s kind of a shock. No parent ever wants to know that their child is affected with a condition that’s going to alter their life. For, the most part, knowing I grew up this way, and I feel like my life was pretty good. I didn’t have a fear for him. The biggest fear was how serious his heart condition was. That was more concerning than his disability,” said Bannon.

Her baby boy Timmy was born without arms too.

As soon as Timmy was old enough, Bannon teaches him everything she knew. Thanks to his mother, Timmy also does everything on his own now.

Each day, Timmy learns from his mother how to improvise daily tasks by utilizing his lower limbs.

And luckily, Timmy is a confident boy. He likes to be out with the people talking and physically active as much as he can be despite what he’s lacking. He even swims, pays video games, plays guitar, takes taekwondo classes and rides a modified bicycle.

He lives his life just like other people. The only difference is he uses his feet.

Timmy is a happy and confident boy.

The mother and son duo basically trying to live normal lives without depending much on others to help despite their condition.

Their positive attitude and perseverance are what we all need in life.