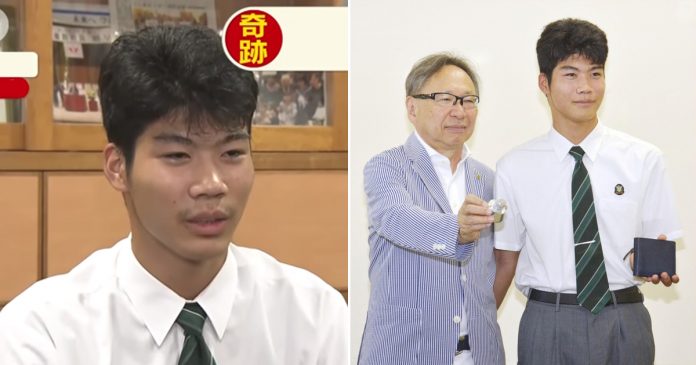 The 17-year-old Raki Sakimoto from Nagano attended school in Naha, Okinawa Prefecture, Japan. In order to return to his hometown to attend his uncle’s funeral, Sakimoto needs to take the plane as the distance between the two places are very far.

As he took the Okinawa monorail and arrived at Naha Airport to return home, Sakimoto realized that his wallet was missing—leaving him without any money to buy his plane ticket. That was when the 68-year-old Hiroshi Kannoya noticed him in agony, looking all devastated.

Sakimoto was all stressed out after he lost his wallet.

The distance from Naha to Nagano was very far, so Sakimoto can only get there by plane.

After learning about Sakimoto’s unfortunate event, Hiroshi quickly passed the young man 60,000 yen (around US $547) he needed to buy his plane ticket to return home—without even confirming his identity as his flight time was approaching. Just like that, Sakimoto was able to safely return home with the help of a stranger.

Working as a doctor in Saitama Prefecture, Hiroshi was at that time just finished his work and about to leave for Hokkaido from Okinawa.

He was shocked when finding out that Sakimoto had lost his wallet but decided to believe him and handed his money to the young man.

When Hiroshi got back to Saitama and told his colleague about what happened, he was laughed at as they claimed that Hiroshi was obviously being scammed. After the incident, Sakimoto recovered his wallet and hoped to find the man who helped him when he was having a hard time.

Determined to look for that kind person that helped him, Sakimoto wanted to repay the help and thank him for putting his trust on him. After being reported by the local media, Sakimoto finally succeeded in finding Hiroshi and they both met not long after.

Hiroshi was moved when finding out that the person he helped was indeed an honest young man.

In an interview with the local media, Sakimoto recalled the incident and expressed how thankful he was to Hiroshi.

“I feel like tearing up talking about this. I am extremely touched by his gesture and feel that it’s a kindness I will never be able to repay. The doctor came and comforted me, he helped me. I hope that I can be a person like him in the future—someone who’s willing to help anyone even a stranger.”

It’s good to know that honest and kind people like them still exist in the world today.

Watch they reunited in this video: