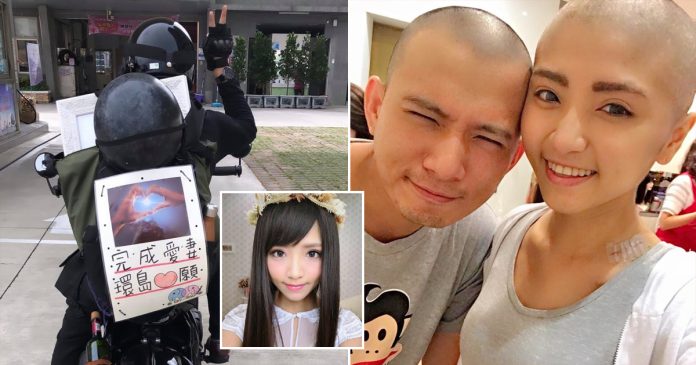 When 25-year-old Shi Baiwei married her husband, Wang Xiaowen in 2016, they were looking forward to having a family and growing old together. Unfortunately, just 10 days after they got married, Shi Baiwei received the most devastating news in her life.

On May 21, 2016, Shi Baiwei and Wang Xiaowen tied the knot. Shi Baiwei was five months pregnant with their first child when they got married and the couple was looking forward to welcoming their baby.

However, just 10 days after they got married, Shi Baiwei was diagnosed with lymphoma cancer.

When she was told her cancer was at stage 3, Shi Baiwei could not help but feel devastated with the unexpected news.

Nevertheless, she said that she was fortunate to have such a supportive and understanding husband like Wang Xiaowen.

“I am fighting because of him! All this time, my husband has always been there for me and gives me support during the weakest and painful moment in my life. He cries for me as if he could also feel the pain that I feel,” she said.

To show support to his wife, Wang Xiaowen also set up a Facebook page for Shi Baiwei as her form of escapism from cancer and to share her experience undergoing rounds of chemotherapy with other people.

Shi Baiwei gained her courage and strength to undergo chemotherapies thanks to the tremendous support she received from her husband and the kind-hearted netizens on Facebook.

Nothing else matters to Shi Baiwei than Wang Xiaowen’s love and support for her. He always accompanied her in every round of chemotherapy.

When Shi Baiwei had major hair loss due to her cancer treatment, Wang Xiaowen decided to shave his head bald so that his wife would not feel alone in her recovery journey.

Unfortunately, after multiple treatments and a stem cell transplant, Shi Baiwei’s condition got even worse. Eventually, after 11 months of cancer treatment, Shi Baiwei lost the battle against cancer and passed away on May 23, 2017.

On the last day of her life, Wang Xiaowen recalled when Shi Baiwei suddenly took her oxygen mask off and said, “Husband, I love you,” to him three times before she passed out.

She later died peacefully with him by her side.

Now, two years after Shi Baiwei passed away, Wang Xiaowen is on his mission to fulfill his promise to his late wife.

Before Shi Baiwei passed away, she expressed her wish to travel around Taiwan with him after she recovered. As Shi Baiwei lost her battle against cancer, Wang Xiaowen is now making sure that Shi Baiwei’s wish will come true.

In the latest update that Wang Xiaowen posted on Facebook, he shared a photo of him on a motorcycle making a ‘peace’ sign. He also brought along his wife’s photo with him throughout the journey.

There was also a sign at the back of his motorcycle that read, “I’m on my mission to fulfill my late wife’s wish to travel around Taiwan.”

Shi Baiwei may have left the world but her spirit and love will continue to stay in her husband’s heart forever.