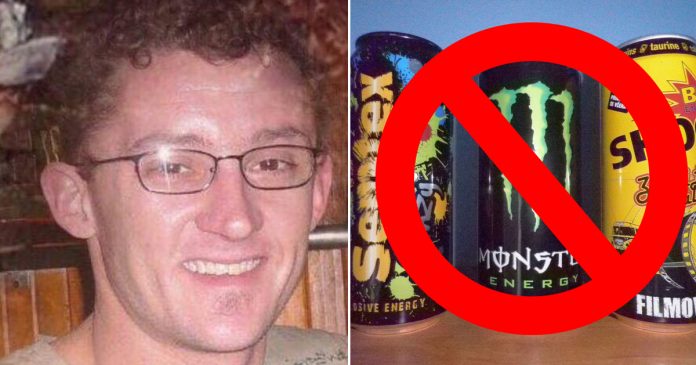 While energy drinks very rarely cause fatal caffeine poisoning, a man from Perth, Australia fell victim to the effects of caffeine overdose after consuming too much energy drinks.

35-year-old Michael Clarke had been consuming energy drinks and made it a habit to drink it every day, sometimes as many as four cans per day.

Like other typical energy drinks, the energy drink which is popular in Australia and New Zealand contains a high level of caffeine, at 160 mg of caffeine per can.

That alone is two-thirds more caffeine than a normal cup of coffee.

Knowing that it was not good for his health, his mother, Shani Clarke told him that his habit could be harmful to his health after she saw him carrying an armful of cans out of his truck.

Unfortunately, Michael had a cardiac arrest while driving in January 2014. That day, he consumed four cans, which is an equivalent of four or five cups of coffee.

The doctors explained that the extremely high level of caffeine had put his heart under a massive strain.

Shani was devastated when she found out the cause of her son’s death. “I can’t tell you the pain I felt at that moment, my heart just hit the floor and I sobbed and sobbed,” she wrote following her son’s passing.

However, instead of letting Michael’s death overwhelm her, Shani decided to warn others the effects of drinking too much of energy drink.

She then set up a Facebook group to educate others about the serious effects of consuming too much of caffeinated beverages and five years later, she still runs the page.

“I was so angry when I found out it was caffeine as I had lost my first born and it could have been avoided if he hadn’t drunk so many of these drinks without a break,” she wrote in a Facebook post.

The Facebook group only had 500 users when it was first set up and now, it has more than 1,700 users who refer to the group for some help and motivation for them to kick the unhealthy habit.

As for Shani, there is still a lot more need to be done especially if keeping the group alive means she gets to help more people to be aware of caffeine overdose.

According to a study published in the Journal of the American Heart Association, drinking 4 cups of energy drink in a short amount of time may increase blood pressure and the risk of electrical disturbances in the heart which can affect one’s heart rhythm.

“The public should be aware of the impact of energy drinks on their body especially if they have other underlying health conditions,” said Sachin A. Shah, professor of pharmacy practice at the University of the Pacific who led the study.

Japan Has Discovered a Non-invasive Cure for People with Myopia by...

4yo boy lost 18 teeth because he rarely brushed them after...