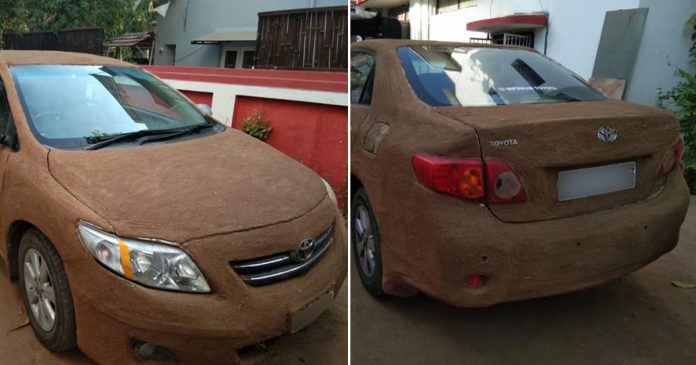 A woman in western India found quite a peculiar way to protect her car from the extremely hot temperatures and it involves some cow dung.

While most people choose to brave the scorching summer heat when they get on their car by blasting the cool air from the air-conditioner, this home-maker from Gujarat, India coats her car with a thick layer of cow dung.

According to the woman named Sejal Shah, she covered her entire car with cow dung as it keeps her car cooler in summers and warmer in winters!

“It not only keeps my car cool but also helps in preventing pollution,” Shah told news agency ANI.

“The harmful gases that are released while we use car AC increase the temperatures and contribute to global warming. I drive my car switching off the AC as the cow-dung keeps it cool.”

According to India Express, Shah was inspired by the old practices of rural residents where they smeared their walls and floors of their homes with a layer of cow dung during extreme weather.

“I got this idea as I used to put cow-dung on the floor and walls of my house. It keeps the house cool. Hence I decided to put it over my car,” she said.

When photos of her car in a thick layer of cow dung went viral on social media, it quickly attracted mixed reactions from the internet.

Some users thought that Shah’s idea was a brilliant way to make use of cow dung. “Best use of cow dung I have ever seen. To counter 45-degree heat temperatures and protect her car from getting hot, Mrs. Sejal Shah has plastered it with cow dung. Getting cool,” wrote one user.

However, there were some people who thought that coating a car with cow dung was not the best idea.

“This is the most stupid thing I’ve ever come across,” another user commented.

“Did it work? I am thinking that this would actually heat it more, since the ‘source’ of heat along with the passengers will be inside the insulation!”

It can get really hot in parts of India like Gujarat, Delhi, Punjab, Maharashtra and Odisha as these regions have recorded high temperatures as high as 40 degrees Celsius.

Shah’s trick to counter the hot weather may be peculiar but who knows if it actually works!