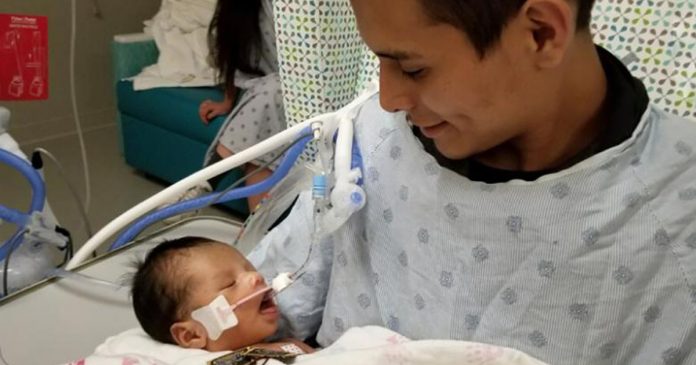 Yovani Lopez nearly did not survive after he was forcibly removed from his mother’s womb during a horrifying attack. Now for the first time in his life, he could breathe without the help of a ventilator.

On April 23, Yovani’s mother, Marlen Ochoa-Lopez was strangled to death by Clarisa Figueroa who then cut the baby from his mother’s womb.

Figueroa later brought baby Yovani to the Advocate Christ Medical Center while pretending as his birthmother when Yovani struggled to breathe.

The newborn was quickly placed inside an intensive care unit following the incident.

However, it was not until May 15 that Figueroa was arrested after a DNA test was performed on baby Yovani.

The little baby was later reunited with his father, Yovani Lopez Sr.

Just last month, Yovani’s family was told that he had no brain function and would not be able to survive. Nevertheless, his family was still praying for a miracle and his recovery as they chose not to turn off his ventilator.

Recently, Yovani shows his fighting spirit as he makes a slow recovery.

Now, at the age of six weeks old, he has defied all odds and breathed for the first time without the help of a ventilator.

His progress has been a piece of heartwarming news after they tried to cope with the devastating death of Ochoa-Lopez.

“It’s still a long way to go for the baby, but the baby is fighting and surviving,” the attorney for Lopez Sr and his family said.

The hospital where Yovani is currently treated is under investigation after they failed to call the police when Figueroa brought Yovani to the hospital although she showed no signs of giving birth recently.

In spite of having blood on her “arms, hands and across her face” which belonged to Ochoa-Lopez and not showing any physical signs that she had given birth, the hospital failed to alert neither the police nor the Department of Children and Families.

It was only on May 7 that when Ochoa-Lopez’s friends alerted the police about Figueroa that they found out about the murder.