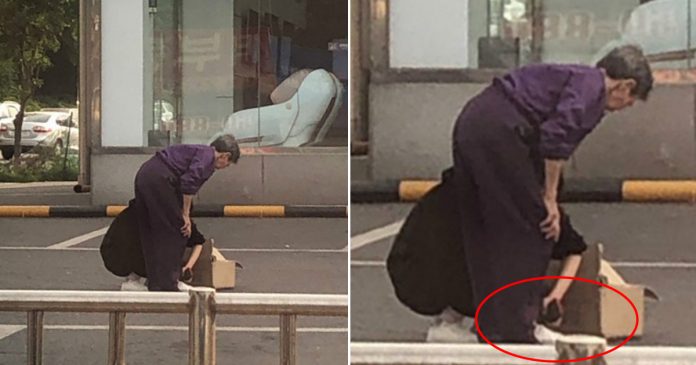 It is not every day we can witness a random act of kindness with our own eyes, but a person that is only known as Mr. A gets to see a heartwarming event happening just in front of him and decided to let the world know by sharing it in an online community group.

Mr. A happens to be on the opposite lane when he saw an elderly woman walking on the road near the Gwangju Public Health Center in Gyeonggi Province, South Korea.

“Yesterday, I witnessed a very heartwarming incident at a crossroad in front of the Samsung Plaza when I was driving to send my children to school.”

According to Mr. A, the grandmother was at that time wearing only one side of the shoes and her pants seemed to be quite dirty—she most probably urinated in her pants. As he was about to get out of the car while asking his children to report the situation to the police, Mr. A suddenly saw a young lady come running towards the grandmother.

The young lady quickly took the grandmother’s hand and brought her to a safer place. But what she did after that was even more heartwarming.

She took off her own shoes and put them on the grandmother’s feet.

After the news went viral, people found out the identity of the ‘kind angel’—a 22-year-old Park Dae Young who is working as a barista in a cafe near Gyeonggi Province.

“I was walking across the crossroad when I saw the barefooted grandmother with a box full of ramen. At first, I thought it might be okay but later I think she could be in danger if I leave her like that,” said Park talking about her experience helping the grandmother with dementia.

Thanks to her kind act, Park received a token of appreciation from the Gwangju Police Station in Gyeonggi Province acknowledging her help to the grandmother.

Park also mentioned that she gave up her shoes for the grandmother because there might be pieces of glass on the road.

“I gave my shoes to her so that she will not get hurt. I’ll be okay because I still have my socks.”

Such an angel in disguise!