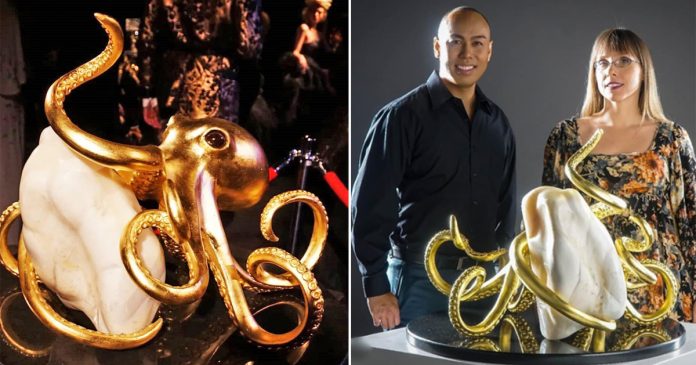 A 34-year-old mineral broker Abraham Reyes received a rather strange-looking family heirloom from her aunt a few years ago and has been keeping it in a safe deposit box. Has been passed on from one generation to another from his grandfather, Reyes never thought it was something that valuable.

Besides knowing that his grandfather got it from Palawan, Philippines, they thought it was just a white ‘rock’ looking like a tooth. But Reyes had a hunch that it must be a valuable pearl even when the shape didn’t easily give away that it was a pearl.

This is because his grandfather found it in a giant clam he bought from a fisherman back in 1959.

“Nobody really looked at it,” said Reyes.

As his aunt had her suspicions just as much as he did, Reyes decided to get the heirloom authenticated at the Gemological Institute of America in New York City with the help of a consultant in Asian art, Anthony Wu. To their surprise, the strange-looking ‘rock’ is indeed a pearl!

Weighed at 61 lbs, Reyes’s family heirloom is four times the weight of the Lao-Tzu Pearl—the pearl believed to be the world’s largest recently.

“There’s no other recorded example of such a massive giant pearl that’s even remotely close to this piece,” said Wu.

Reyes named it as Giga Pearl, the white and cream-colored pearl believed to be more than 1000 years old is about the size of a baby. Two experts recently told him it’s the largest pearl they’ve ever seen and insurance appraisers said its value may be worth up to $90 million!

After the shocking discovery, Reyes now wanted to show it off to the world and commissioned an octopus-shaped holder made from 22-carat gold to hold the pearl.

“It’s priceless to me. I want to find a place for it to be showcased. I believe the world should know that it does exist,” said Reyes.

Who knows a thing they ignored that long is worth that much!