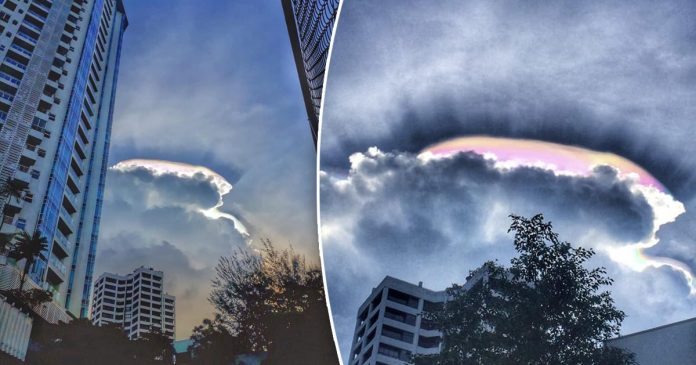 Residents in Bangsar city in Kuala Lumpur, Malaysia were blessed with a chance to witness an unusually rare phenomenon in the sky on May 28.

The rare phenomenon saw thick clouds with aurora-like lights peeking out from behind which in turn created a burst of color in the sky.

The natural phenomenon is believed to be the “Crown Flash”, a rare weather phenomenon caused by sunlight reflecting or refracting off small ice crystals in the clouds.

It was also first scientifically recorded in the Monthly Weather Review journal in 1885.

According to The Malay Mail, several Facebook users in “The Republic of Bangsar #TROB” group shared photos of the spectacular phenomenon which happened in the evening of May 28.

The photos quickly caught the attention of many netizens as many people were amazed by the majestic appearance of it.

“Has anyone seen this amazing optical view yesterday (Tuesday)? I may be mistaken but I think it’s a rare ‘Crown Flash’. These pictures were taken at Bangsar Heights from 5.21pm to 5.35pm on May 28, 2019,” wrote a netizen.

Meanwhile, another netizen commented, “Blessed that I managed to witness this elusive and majestic phenomenon. Mother nature is truly amazing.

“I saw it as well, (it) was gorgeous. Seemed like the heavens were opening,” wrote another netizen.

Heartwarming photo of a boy letting his mother use his hand as a “pillow” on the train. It’s melting the hearts of netizens!