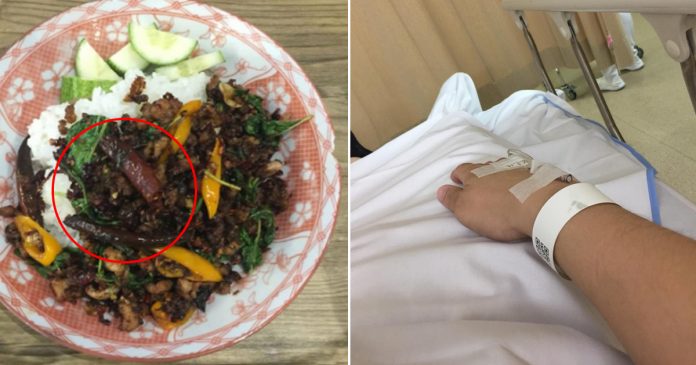 However, one should be careful not to go overboard with the spicy food challenge or they might risk landing themselves in the hospital!

That was what happened to a Thai man when he decided to try out the world’s hottest chili, the Carolina Reaper, with his basil pork rice.

According to China Press, the man who apparently loves to try out new food requested for the super spicy chili to be added to his food.

He then swallowed three Carolina Reapers at once with his basil pork rice.

Unfortunately, his food adventure later took a wrong turn as his body quickly reacted to the chilies.

Just a brief moment after he ate the chilies, his abdomen felt extremely hot and painful.

Apparently, the pain was too much that he was later rushed to the hospital. The man kept wretching while he was on the way to the hospital and as soon as he arrived at the hospital, he was sweating profusely and was unable to walk by himself.

He was then transferred to the intensive care unit where the nurse gave him some antacids and performed first aid on him.

Only after an hour later, the pain began to subside and he was finally allowed to discharge from the hospital. The man then had to pay 7,300 baht (USD 231) for the medical bills.

Following the incident, he warned others to take protective measures first before trying out spicy food that contains Carolina Reapers.

The restaurant where the man dined in prior to the incident would also warn their customers the chilies’ effect but they will not stop them if they insisted on trying the chilies.

Adidas announces closing down stores in the coming years and this...