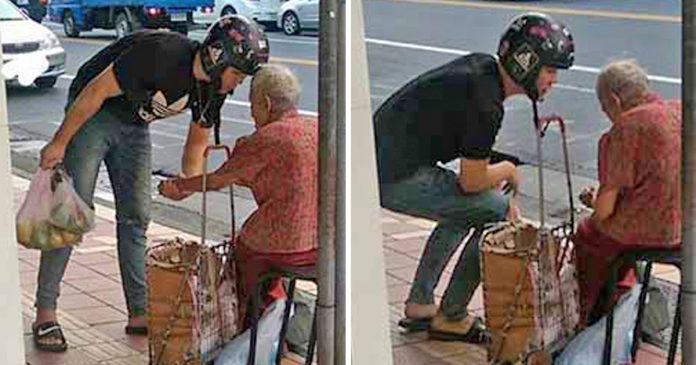 Sometimes, just a little act of kindness is what you need. One day, a girl named Huang was waiting in front of the Nantou Passenger Bus Terminal after school when she saw a heartwarming scene happening upon her eyes.

It all started when she saw an elderly woman sitting on a chair near the roadside selling fruits. Looking sad and alone, the grandmother was probably waiting for people to come and buy her goods, but nobody came near her.

The elderly woman was sitting alone in a chair while waiting for her customer.

Then suddenly a guy in a black shirt, jeans and slipper came and approached the old woman. Most probably didn’t want to see the grandmother tirelessly sitting and waiting there, he decided to buy the guavas she’s selling. Not only one but two plastic bags full of fruits, the man quickly bought the guavas and paid for it. He even insisted not to collect the change from his purchase.

The kind man bought fruits from the grandmother.

Not only that, the sweet young man constantly reminding the grandmother not to go out and sell her fruits during rainy days. He also helped the grandmother by requesting the passerby to buy the fruits from her.

Touched by this incident, Huang decided to take pictures and post about it on social media. After learning about the man’s heartwarming gesture, netizens praise him for his act of kindness and touched by how his small act brings warmth to all of us.

A man like him is what makes the world a better place.