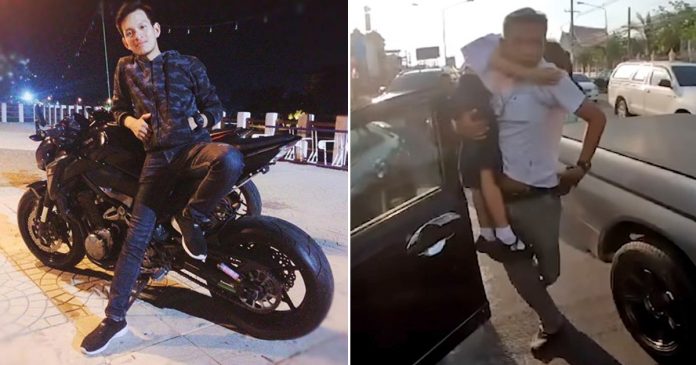 The last thing this father expected while he was stuck in heavy traffic was to see his daughter suddenly experienced a seizure and foaming at her mouth.

Unfortunately, his worst nightmare came into reality when his daughter suddenly got a potentially deadly tonic seizure while they were stuck in a traffic jam last Thursday on May 23.

The father, 51-year-old Sorachat Sadudee became panicked when his daughter, Kaimook started to foam at the mouth.

The incident happened after he picked up his two daughters from school in Phitsanulok, central Thailand.

Sorachat then tried his best to rush back home but it was just impossible as the heavy traffic did not allow him to pass through.

As Kaimook later passed out in the back seat of their car, Sorachat then decided to roll down his car window and started honking and shouting for help from other motorists.

“At that moment, she was in a very terrible condition. Her hands were jerking, her mouth had turned green, and her body was so pale with a high temperature too,” Sorachat said.

He noticed Sorachat when the father was frantically trying to revive his unconscious daughter inside his black car.

In footage captured by Itthiphon’s helmet camera, the biker quickly parked his motorcycle and rushed to Sorachat’s car to assist him.

After learning how serious the situation was, Itthiphon later knocked on car windows and explained to other motorists as he asked them to give way to Sorachat’s car.

Thanks to Itthiphon’s help, Sorachat managed to park his car on the roadside.

He then carried his unconscious daughter to Itthiphon’s motorcycle.

Soon, Itthiphon quickly rushed the father and the daughter to the hospital as he expertly maneuvered through Thailand’s rush hour.

In just four minutes, they managed to arrive at a nearby hospital where the daughter was given emergency medical attention.

Luckily, the hospital managed to save Kaimook and she was later transferred to another hospital for further treatment.

As for Sorachat, he finally could take a sigh of relief after learning that his daughter was saved thanks to Itthiphon’s quick action.

“I couldn’t thank him enough for his kindness. He saved my daughter’s life. As soon as she is fully recovered, I’ll take her to meet him and thank him again in person,” Sorachat said.

Meanwhile, Itthiphon said that he did not think much when he saw the panicked father.  ”At first, I was also surprised to see her having a seizure. I didn’t know how to treat her but I knew that I could take her to the hospital with my motorcycle.”

“As I am also a father, I know what it feels like to see our children collapsed and in pain in front of us. So, I didn’t even hesitate to help her,” he said.