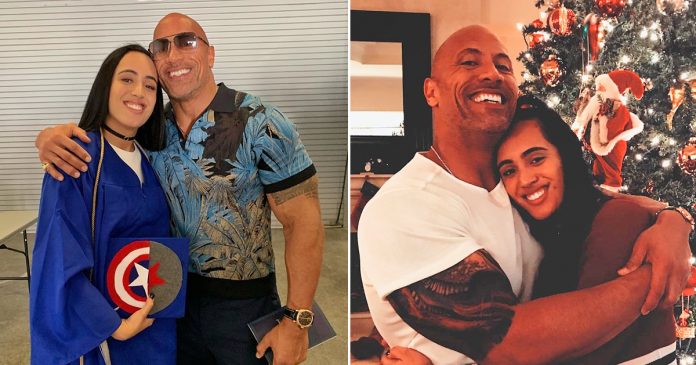 The Hollywood actor shares a sweet photo of daughter Simone wearing her cap and gown at NSU University School in Fort Lauderdale.

“And then your babies graduate. Very proud of my first daughter graduating high school, kickin’ ass and is now NYU bound. I love you and one day you’ll stop pulling away from my beastly arms & kisses,” he captioned the post on his Instagram.

The last line of his caption refers to his attempt at planting a kiss on his teen daughter’s cheek as Simone playfully pulls her famous father away.

According to W Magazine, Johnson shares Simone with his former wife, Dany Garcia. The couple split in 2008 but remains close as Dany actually became Johnson’s manager in the same year.

The teenage girl also replied to her father’s heartwarming caption. “Love you. Thank you for coming,” Simone wrote back.

The girl maybe only 17 years old but she is quickly becoming a star in her own right.

When Simone was 16, she was honored to be the Golden Globes Ambassador, a title which usually goes to a celebrity’s son or daughter to assist in distributing Golden Globe trophies at the ceremony.

The ambassador also works to raise awareness for a selected charitable cause.

“As the newly minted Golden Globe Ambassador, I hope to serve as a role model to young people everywhere and empower them to speak out on issues they are passionate about,” she said.

Simone has also partnered with GlobalGirl Media, a nonprofit that helps young girls to express themselves through digital journalism and tell their stories.

“I think that social media is a great way to speak up about issues that people are passionate about and things that they feel need to be changed,” the budding role model said.