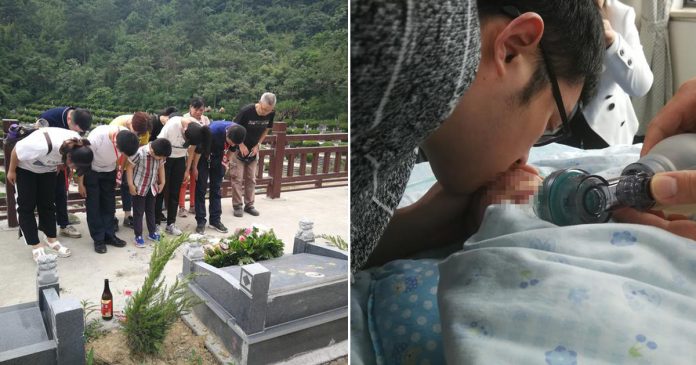 It was the most heartbreaking time for a man when he lost both his wife and his newborn baby within a week.

The heart-rending story recently took place in Huzhou, China in April 2019 when the man and his wife were preparing to welcome their newborn baby.

According to Oriental Daily, the man and his wife, Fei Fei, received news that they were pregnant with their baby in July 2018. The couple even nicknamed their unborn child ‘Little Pea’ as they hoped for the baby to grow up healthy and happy.

“Fei Fei would read stories to the baby every day and sometimes, she asked me to accompany her,” the husband said.

On April 18, 2019, Fei Fei went into labor and they quickly rushed to the hospital. Unfortunately, Fei Fei passed away due to a life-threatening complication called amniotic fluid embolism (AFE), where the amniotic fluid enters her bloodstream.

Her lungs and heart collapsed and Fei Fei did not survive.

Meanwhile, their newborn suffered from various health issues and was transferred to the NICU.

In spite of receiving treatment, the baby had severe suffocation and was pronounced dead just six days after the infant was born.

It was the darkest day for the man as he now had to let go of his newborn when his own wife just passed away six days earlier.

After sitting outside the NICU overnight, the man then decided to donate his baby’s organs so that other babies could survive.

“My wife told me before that she wanted to help others if her life can’t be saved. I’m sure she agrees with my decision (of donating the baby’s organs),” the man said.

A few days later, the man signed the document with the Red Cross Society to donate the baby’s corneas and kidneys.

Just before the baby was wheeled into the operating room, the man kissed the baby’s forehead and put the toy that Fei Fei made for Little Pea.

It was a sad day for him but nevertheless, he believed that his wife and Little Pea would reunite in the afterlife.

“Little Pea, you haven’t had a chance to look at this world and you’re gone. Now, another person can look at the world on behalf of you. I’m sure you’d support my decision. Please take care of your mother in the afterlife for me.”