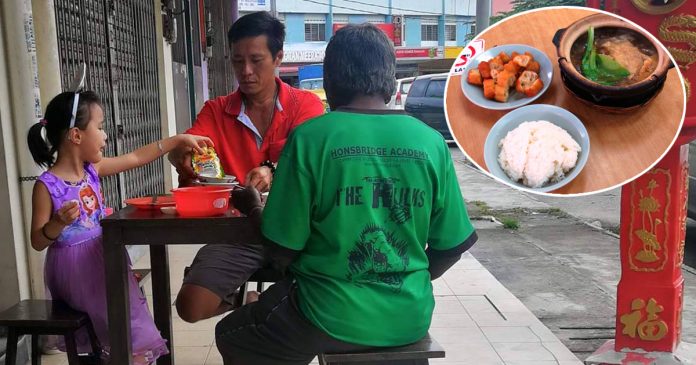 It is easy to overlook the homeless and the people in need as we get caught in our busy daily lives but this pair of father and daughter shows how important for us to show simple acts of kindness at every chance we get.

In a heartwarming photo by Facebook user Willy Chong, a father and his young daughter sit down at a table as they eat together with a man who appears to be homeless.

According to Mothership, the duo was eating at a Bak Kut Teh (a pork dish cooked in broth) shop in Malaysia when they suddenly noticed an Indian man standing nearby.

Chong wrote that the man who was wearing a green shirt looked hungry as he kept staring at the entrance of the shop.

“I was very touched by something I saw today. This Indian brother in green is a vagrant. He stood at the entrance of this Bak Kut Teh shop and stared as he rubbed his stomach,” Chong wrote.

“The brother in red saw him and asked if he was hungry. When the vagrant nodded his head, the Chinese brother (in red) invited him to sit down and ordered some food for him.”

As the heartwarming scene unfolded before him, Chong then heard the daughter asked the father to give the man a cup of tea.

“More importantly, the little girl did not avoid the old vagrant, but insisted that her father give him a cup of Chinese tea.”

“There is compassion in this world. I want to commend this father and daughter. This father is such a role model. This is the right way of bringing up a child. Malaysia is a multi-racial nation. It doesn’t matter what race you are, everyone can co-exist in harmony. This is how Malaysia can progress.”

Chong’s post quickly made rounds on social media as thousands of people were moved by the simple act of kindness shown by the father and his daughter to the man in need.

Most comments praised the kind-hearted duo for showing a good example. “There is love in this world!” one user commented.

“Kudos to the father for raising his girl this way. Good upbringing,” commented another user while one user wrote, “There’s compassion in the world, regardless of race, very good.”

It may be just a simple act of kindness but we believe that it meant everything to the vagrant at the time.