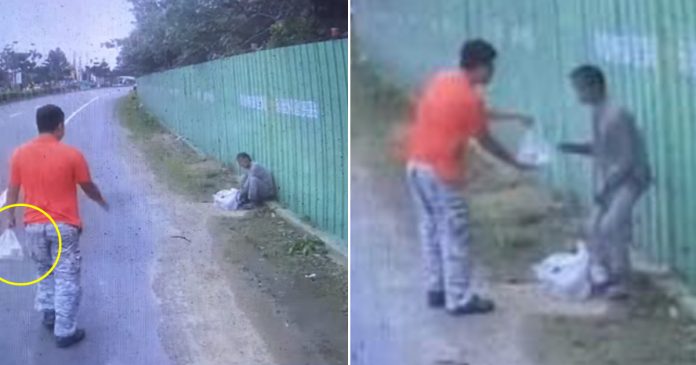 “I know how it feels to be hungry and helpless,” a kind-hearted driver recalled the darkest time of his life when he saw a homeless man on the side of a road looking helpless.

The driver was on his way to his destination when he noticed a man who appeared to be homeless was squatting by the roadside.

It was just a brief glance but it was enough for the driver to realize that the homeless man was feeling despair and hungry at the time.

Knowing that he had to do something for the homeless man, the driver then made a sudden turn at an intersection despite it was illegal to do so.

He then drove to the other side of the road to find the homeless man.

As soon as he spotted the man, the driver then parked on the roadside. He then got off his car and took out his lunch to give the homeless man who was surprised by his presence.

The homeless man appeared to refuse the driver’s kind gesture at first.

However, after the driver insisted, the homeless man then accepted the food and thanked him.

In a Facebook post where the driver posted footage of the incident, he wrote, “I know that many people are not a fan of big cars but I assure you that many of us are actually kind.”

He then continued saying that he was willing to pay for the traffic ticket since he parked illegally on a roadside but he could not bear to see the homeless man walk away without food.

“I know how it feels to be hungry and helpless. I think it was fate that brought me to him. It may not be much, just a lunch but I hope it will help him to feel better,” the driver wrote.

13yo boy builds a tiny home for himself and spent only...