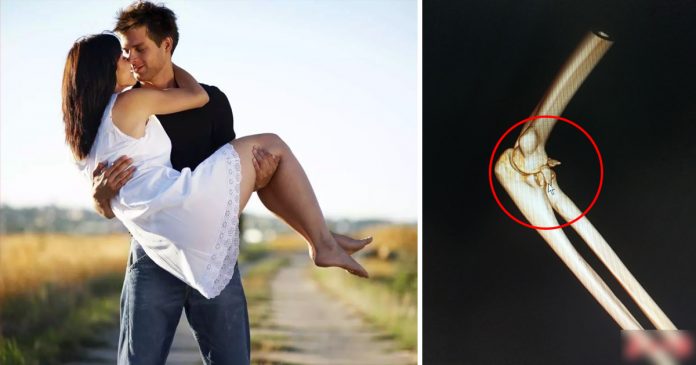 A 20-year-old man wanted to perform a grand, romantic gesture to his girlfriend by carrying her in his arms but it did not end as romantic as he thought.

According to China’s CJN News, the man named Li Nan took his girlfriend out for a romantic dinner in Wuhan on May 20 to celebrate “520 Day”, the Chinese equivalent to Valentine’s Day.

During the dinner, Li who weighs 143 lbs. (65 kg) wanted to surprise his girlfriend by carrying her in his arms but it ended up breaking his right arm.

Apparently, his girlfriend weighs 154 lbs. (70kg) and is heavier than him but he insisted to carry her. Unfortunately, when he attempted to pick her up, he heard a cracking sound coming from his right arm.

“It was already late when I found out that I couldn’t hold it,” Li said when he realized that he might have fractured his arm.

The romantic gesture later ended with Li and his girlfriend rushing to the hospital as he complained of severe pain in his arm.

A diagnose later revealed that Li had broken his right elbow and had to undergo a surgery.

Dr. Huang Zhenfeng of Wuhan Fourth Hospital said that Li may have the wrong posture when he decided to do the romantic gesture to his girlfriend.

He added that carrying someone in arms when one is kneeling in an incorrect position will cause a heavy strain to the waist.

“If you do not kneel down and bend directly to hold people or heavy objects, it is easy to cause an injury to the waist,” the doctor said.

“She said she’d be a yellow butterfly” Man visited by butterfly...