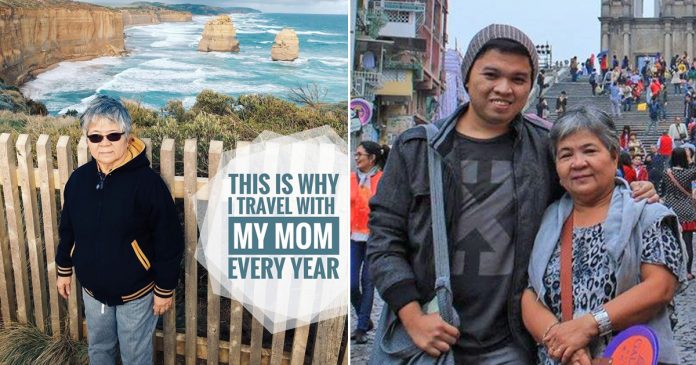 While in many parts of the world, children leave their childhood home by the time they turn 18 years old, there are some cultures in which the children stay with their family through adulthood and enjoy a close bond with their parents, including the Filipino culture.

It is common to see many Filipinos choose to live with their parents even when they already have families on their own.

This is one of the many ways children show their love towards their parents and most of the Filipino parents prefer to have their children to stay with them at their family home as well.

So, when someone shamed Yoshke Dimen for being a “grown-ass man traveling with his mom”, he did not feel insulted at all.

He knew what he was doing was right and most importantly, it was what made his mother happy.

Known as “The Poor Traveler”, the Filipino blogger shared his thoughts about what everyone should do after becoming successful in the future.

As for Dimen, he had always wanted to bring his mother to travel around the world.

“I remember our first trip together. In the middle of our cable car ride in Hong Kong, my mom shed tears. When asked, she said she just never expected she would be able to travel overseas,” he explained.

“You see, my mom grew up in dirt poor family.”

According to his blog in “The Poor Traveler”, his mother only studied until grade 6 as his grandparents were too poor to send all of their children to high school.

“Someone needed to stay at home and help them work. Unfortunately for my mom, it was her. She’s always valued education, but there was nothing she could do,” he said.

Due to her poverty, his mother was determined to send all of her children to universities.

So, when he graduated from college and got a job, he promised to take his mother to travel every year.

“She had never traveled far, so I promised myself that when I started earning well, I would travel with her every year,” he added.

Since his post went viral, a lot of other netizens took inspiration from him with some people even joked about starting a club of “grown-ass kids traveling around with parents”!