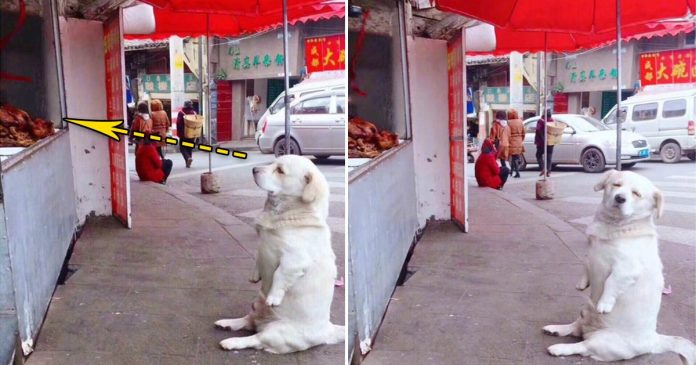 This adorable golden retriever really knows how to get fried chicken for free and his trick has won not only the stall owner but thousands of hearts on the internet!

In several hilarious photos of the smart dog, the canine can be seen sitting in front of a fried chicken stall as he stares at the pile of freshly-cooked fried chicken.

It was first posted by an unknown user before it went viral on the internet.

“I saw the dog sitting in front of a fried chicken stall with his eyes fixed on the fried chicken. He even refused to leave and continued to sit in front of the stall like a seal!” the caption says.

“Can you hurry up with my order, please? I have been waiting for a while.”

The adorable dog might have been waiting patiently for the owner to notice him sitting in front of the stall for some free fried chicken.

However, the dog might have been waiting for too long for his turn that he later pouts and shows a sullen expression when his fried chicken never arrives.

Photos of the dog sitting in front of the fried chicken stall quickly caught the internet’s attention as many people found the dog’s reaction hilarious.

However, some users commented that it is not good for dogs to eat greasy food like fried chicken and to sit in such posture as it will hurt their spine.

Nevertheless, this adorable and smart dog definitely deserves a round of applause for his determination to get some fried chicken for free!