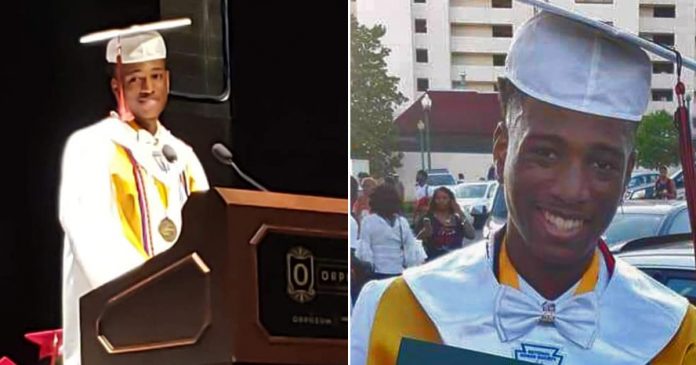 In spite of being homeless and facing struggles, this inspiring Memphis teenage boy graduated high school as valedictorian of his class.

17-year-old Tupac Mosley had been living a tough life when he and his family became homeless after his father passed away.

They had to move from a homeless shelter to another after they were forced to move out of their home in February this year.

However, the teen took it as a challenge rather than a major deterrent.

“Many of us on stage have lost one already, including myself. I lost my father my sophomore year,” he said.

“But that did not act as a complete deterrent to any of us, because we are still here today, on stage, graduating.

Mosley then revealed his father’s passing sent his family into a spiral of sorts.

“We fell behind on bills and we ended up being evicted from our home (earlier) this year,” he told FOX13.

“We went to different homes so far, and we’re blessed to have For the Kingdom.” For the Kingdom is a non-profit camping site that helps vulnerable children and teenagers where Mosley and his family were allowed to stay there.

“The basic necessities in life have been stripped away from us. However, we have prospered and conquered through all of those difficulties,” he continued.

In his speech, Mosley expressed his gratitude to the shelter that took his family in, his teachers, the school principal, and his classmates who he addressed as “the kings and queens of Memphis.”

“We are the Pharaohs (referring to the school mascot). We are the kings and queens of Memphis. We have not had our throne taken away from us. No matter what we go through, we are still going to come out on top.”

He concluded with an inspiring reminder. “Never let your current situation, whatever circumstances you’re going through, be a mountain that you can’t climb,” he said.

Mosley graduated as valedictorian of his class from Raleigh Egypt High School in Memphis, Tennessee.

Thanks to his amazing achievement, he has received 50 scholarship offers from various universities and organizations with a total of $3 million!

He decided to attend Tennessee State University (TSU) in Nashville where he will be taking a degree in electrical engineering.

Shortly after Mosley’s inspiring story went viral, the president of TSU met him in person to offer free housing and meal plans so that the young man would not need to worry about his next meal and accommodation.

Filipino graduate with honors credits her success to parents’ sacrifice and...