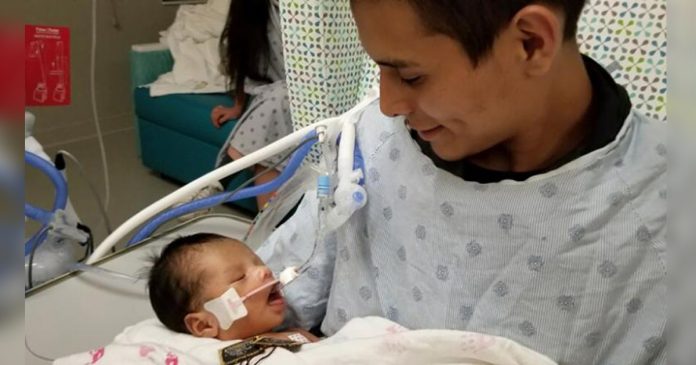 19-year-old Marlen Ochoa-Lopez was pregnant when she was killed last month and her unborn baby was cut out of her womb. Thankfully, her baby son survived.

The newborn baby boy was reported to be in a critical condition after he was cut from his mother’s womb in a horrifying attack on April 23.

However, the little baby has an unwavering fighting spirit as he is currently fighting for his life in the intensive care unit at a Chicago hospital.

In a heartwarming photo taken by Cecilia Garcia, a student pastor who is assisting the baby’s family, the infant appears to be fast asleep while being held by his father, Yovany Lopez.

Various tubes are also seen attached to his tiny body.

Around the time the photo was taken, the baby who has been named Yadiel opened his eyes for the first time.

It was three days before his mother was due to be buried.

“We’ve been blessed, although this is a really bad tragedy, they’re such a loving and humble family and it’s just so wrong what happened to them.”

According to Garcia, she was horrified when she first heard the news about the cold-blooded murder of 19-year-old Marlen Ochoa-Lopez.

“I felt like I was watching a scary movie when I heard about this. It was really bad,” said Garcia.

On April 23, Ochoa-Lopez went to a house in Chicago to pick up some free baby clothes.

She was then declared missing by her family before her remains were found in the rubbish bin behind the suspect’s home three weeks later.

Following the murder, Clarisa Figueroa has been suspected of the murder and cutting the baby from Ochoa-Lopez’s womb.

Figueroa had been pretending that she gave birth to Yadiel on April 23 and even brought him to the hospital.

However, as she showed no recent signs of going into labor, the hospital then alerted the authorities.

According to CNN, the police said that Ochoa-Lopez was strangled to death. The police have arrested and charged three people in the killing; Figueroa, her 24-year-old daughter Desiree who is four months pregnant and her boyfriend, Piotr Bobak, 40.

During the hearing, the prosecutors told the court that Figueroa had asked Desiree to “help killing a pregnant woman and taking a baby”, as reported by the Daily Mail.

Ochoa-Lopez had been to Figueroa’s house once before the murder took place on April 1 after the suspect advertised free baby clothes on a Facebook group for women in need.

During the visit, Figueroa told Desiree that she wanted to kill Ochoa-Lopez and steal her baby.

Nevertheless, Ochoa-Lopez managed to escape from the house because Desiree’s boyfriend refused to help them.

However, when Ochoa-Lopez returned to the house on April 23, the boyfriend was not there. Figueroa then strangled Ochoa-Lopez to death before Desiree cut open her pregnant belly “from side to side” and pulled the baby out.

The three defendants will return to the court on June 3.