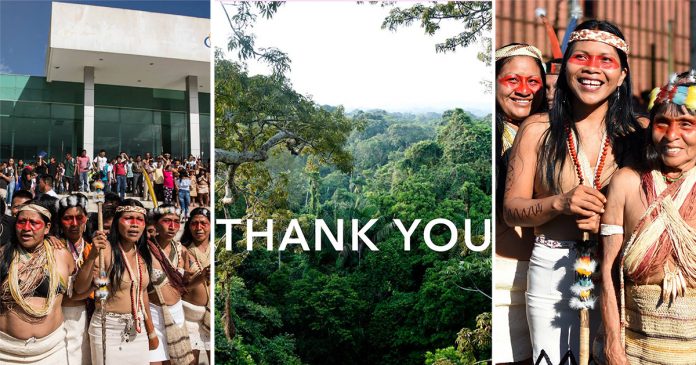 When a group of men came in the middle of the Amazon rainforest where the Waorani indigenous people of Pastaza Province call home, the Waorani thought the men just came to shoot some video.

The indigenous tribe met with the men, exchanged a few words and a few hours later, the men left in the same way they came — by a plane. However, the Waorani had no idea why the men came to see them.

Unfortunately, it was only later that they realized they had just signed over their land to the men they only saw once.

Thankfully, the Waorani did not take the matter lying down. They stood up to the fraudulent actions in court where they fought against several big oil companies and the Ecuadorian government corruption.

Recently in April, the Waorani won the lawsuit.

It began when a number of large oil companies hoping to exploit underground oil reserves in Amazon which has been the home for the Waorani people for many generations.

Unfortunately, the threat came with the government itself engaged in fraudulent practices in favor of the oil companies.

The Ecuadorian Government claims they respected Waorani's rights in earmarking their land for auction. Watch this video and judge for yourself.

According to The Epoch Times, some people believe that government corruption played a role in the exchange where government officials have accepted bribes for the project.

However, as the Waorani people continued to stand up for their rights, the legal battle saw the three-judge panel from the Pastaza Provincial Court sided with the indigenous tribe as they condemned the Ecuadorian government’s consultation process, rendering the sale null and void.

The ruling ensured that half-a-million acres of lands belonged to the Waorani people are protected from mining or drilling. It also stopped the potential of auctioning off a further 7 million acres of indigenous lands to oil bids across 16 oil blocks.

The judges ordered that the government redo the consultation process and apply the standards set by the Inter-American Court of Human Rights before any consultation related to extracting underground resources.

The case which ended in favor of the Waorani does not only mean that the tribe gets to keep their land but it also ensures protection for other indigenous nations of the Ecuadorian rainforest.

The ruling also supports the Ecuadorian constitution which “guarantees the inalienable, unseizable, and indivisible rights of indigenous peoples to their ancestral lands, as well as their access to free adjudication.”

“The government tried to sell our lands to the oil companies without our permission. Our rainforest is our life,” Nemonte Nenquimo, the lawsuit plaintiff and president of the Waorani Pastaza Organization said.

Nenquimo also has an important reminder to those who wish to take advantage of the Waorani people and their ancestral lands.

“We decide what happens in our lands. We will never sell our rainforest to the oil companies,” he said.

“Today, the courts recognized that the Waorani people and all indigenous peoples have rights over our territories that must be respected. The government’s interests in oil are not more valuable than our rights, our forests, our lives.”

Woman recalls touching moments she has to go through to adopt...