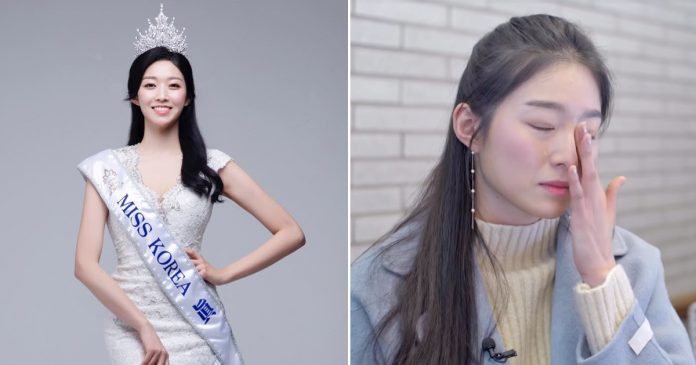 After winning the title of Miss Korea 2018 last July, Kim Min Soo is technically the ‘most beautiful woman in South Korea’ at the moment but apparently, not everyone thinks she deserves the title.

Following her being crowned as the 62nd winner of the South Korean national beauty pageant, Kim has been receiving hates and criticism from the public because of her looks.

At 173 cm (5’8″) tall and a weight of 58.9 kg (130 pounds), Kim Min Soo wows the judges and the audience with her exceptional beauty during the pageant but the public calls her ‘fat’ and ‘overweight’.

“She’s not pretty enough to represent Korea and she’s too fat to be Miss Korea,” Kim recalled some of the comments she received after she was crowned as Miss Korea 2018.

It began when people found out her weight to be on the heavier side compared to the previous Miss Korea winners.

She also explained how the month-long camp held before the national competition banned the contestants from bringing chocolate and candy.

Nevertheless, she said that it was not the worst part of the camp.

According to Kim, what happened during the camp merely reflected the truth about the Korean beauty culture.

She added that the Korean beauty standard has influenced many women to think that any woman regardless of her height should not weigh over 50 kg (110 pounds).

“I personally feel like it’s from immensely photo-edited images that we see on our social media,” Kim said.

“We see celebrities showing off their weight, they say ‘I weigh this much’ and they look very pretty. We subconsciously start to think this is the ideal weight and the ideal body. I see a lot of girls who put a lot of effort into losing weight even though they don’t have to.”

Kim admitted that she felt insecure at some point for getting criticized almost all the time but it broke her heart the most when her father got hurt by the negative comments.

“He goes through all the comments. He’s the one who’s been getting really hurt,” Kim said.

“So, I felt really bad for my parents to look at all that, hear all that and that was the time when I regretted it the most, participating in this pageant competition.”

However, despite all the harsh comments, Kim was hoping she could use her influence as Miss Korea to change Korean beauty standards.

“It really made me think that I should use my platform as Miss Korea to redefine what it means to be ‘beautiful’ and add more diversity to our beauty standards,” she said.

“I want to set that healthy standard on stage for better body confidence,” Kim concluded.

Watch her full interview about her experience during Miss Korea 2018 here.