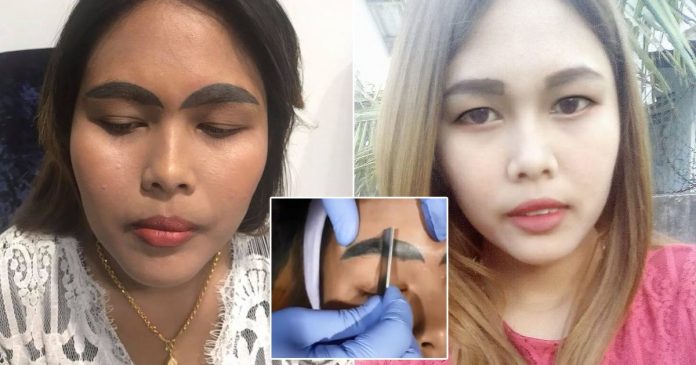 When Kanyarat Dew Chaichan decided to tattoo her eyebrows, she initially thought that the results would come out perfect just like what she saw on the advertisements.

Unfortunately, she was left with a pair of enormous eyebrow tattoos that looks far from what she dreamed off.

The woman from Thailand made headlines around the world when the story of her permanent eyebrow tattoos gone wrong made rounds on social media.

Since she lacks funds to correct the permanent tattoo, Chaichan took the matters in her own hand and decided to complain on her Facebook about it.

In her post, she posted several photos of her eyebrows looking double the size than they used to.

She also wrote how disastrous and terrible the permanent tattoo was and thought that she might have to live with the eyebrows for the rest of her life.

Sundantom even offered to help her out with no charge after she learned that Chaichan could not afford to fork out 200 Baht to travel to her shop.

However, she was more than happy to help correct Chaichan’s eyebrows and warned the public to always do some research about the tattoo artists before having their eyebrows tattooed.

“I could really sympathise with Kanyarat because nobody wants to have eyebrows like that for the rest of their lives,” Sundantom said.

“It was a mistake and this was a very extreme case. I will do my best to help but it will take between three and six months to see the results.”

Even though the corrective procedure was quite a lengthy process, Chaichan said that she did not mind and could not wait to see the results.

“I’m very pleased with the results and grateful for the treatment. I feel much better now, and I think I look a lot more beautiful,” Chaichan said.

“I thought I would be stuck with the big eyebrows for the rest of my life. Now I’m just being patient and waiting for them to get better.”